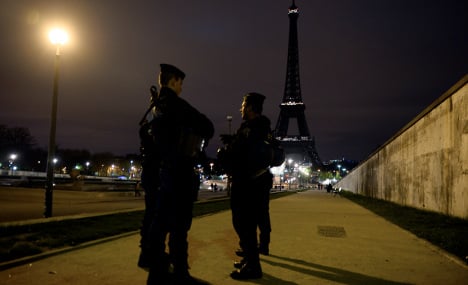 A 29-year-old Frenchman was the first to be confirmed among the seven attackers, all of whom died in the assault, while two other men who registered as refugees in Greece have been linked to the atrocities.

The Greek line of enquiry, and the discovery of at least one Syrian passport at the scene, has raised suspicions some of the attackers or accomplices might have entered Europe as part of an influx of people fleeing Syria's civil war.

“A Syrian passport in the name of a person born in Syria in September 1990 was found near a suicide bomber who blew himself up at the Stade de France
(stadium),” prosecutor Francois Molins told a press conference.

Earlier in the day, the Islamic State extremist group claimed responsibility for the attacks that left a trail of destruction at a sold-out concert hall, at restaurants and bars, and outside France's national stadium.

A total of 129 people were killed and 352 wounded, of whom 99 were said to be in critical condition. The toll does not include the seven attackers.

A national emergency and three days of mourning have been declared. Paris City Hall ordered all city facilities closed, while the Eiffel Tower shut indefinitely.

Amid the fear there was also defiance, as hundreds gathered spontaneously at blood donation centres and flocked to place candles and flowers at the sites where people had died only hours earlier.

In a cafe in central Paris, a man who gave his name as Luc, aged 46, said he was stunned.

“I just don't understand. They keep telling us that they've thwarted attacks, that they've made arrests, and here you've got guys shooting at everyone in a concert hall in the centre of Paris.

“They're unable to protect this city, that's what it's about.”

The remains of the 29-year-old French gunman were found near the Bataclan concert hall in eastern Paris, the bloodiest of the attacks.

A total of 89 people were killed there by armed men who burst in shouting “Allahu akbar” (“God is greatest!”) before gunning down concert-goers and executing hostages.

The jihadists were heard raging at the French president and his decision in September to begin air strikes on Islamic State in Syria.

“I clearly heard them say 'It's the fault of Hollande, it's the fault of your president, he should not have intervened in Syria',” Pierre Janaszak, a radio presenter who was at the concert, told AFP.

The band on stage at the time, US rock group Eagles of Death Metal, survived the attack but have cut short their European tour to return to the United States, promoters said.

As heavily-armed police stormed the Bataclan at around 12:30am, two of the gunmen blew themselves up, while the third was shot by police.

Three suicide bombers also detonated their explosives outside the Stade de France stadium where France were playing Germany in a football friendly attended by Hollande, who was evacuated.

The seventh attacker blew himself up on a bustling avenue near the Bataclan concert hall, injuring one other person.

Analysts at Eurasia Group said the attacks “confirm a structural shift in the modus operandi of the Islamic State, and represent a prelude to additional attacks in the West.”

The investigation quickly spread beyond France on Saturday as Belgian police arrested several suspects in Brussels, including one who was in Paris at the time of the carnage.

Michel told Belgian television that the arrests were linked to “suspect vehicles” identified during the investigation by French police.

French authorities also asked their Greek counterparts for information on the passport found at the scene of the Stade de France attack.

“We confirm that the (Syrian) passport holder came through the Greek island of Leros on October 3 where he was registered under EU rules,” said a statement issued by Greek minister for citizen protection, Nikos Toskas.

Another foreigner sought in connection with the attacks was also found to have registered in Greece, police sources confirmed to AFP.

Greece is the main entry point in Europe for hundreds of thousands of Syrians refugees and European security forces have long feared that Isis militants could hide among them.

In Germany, the authorities said they were looking into a possible link between the attacks and the arrest in Bavaria last week of a man with a car-load of weapons and explosives.

The Paris attacks were “prepared, organised and planned overseas, with help from inside (France),” Hollande said.

The massacres sparked an outpouring of emotion around the world, with London's Tower Bridge, Berlin's Brandenburg Gate and the World Trade Center in New York all illuminated in the red, white and blue of the French tricolore.

Mourners also broke out in spontaneous renditions of the French anthem “La Marseillaise”, including at a rally in Dublin and at New York's Metropolitan Opera.

US President Barack Obama described the onslaught as “an attack on all of humanity” and an emotional Pope Francis said he was “shaken” by the “inhuman” attacks.

British Prime Minister David Cameron said the attacks “suggest a new degree of planning and coordination and a greater ambition for mass casualty attacks”. France has been on high alert following the January attacks and narrowly averted more bloodshed in August when a gunman was overpowered on a packed high-speed train coming from Amsterdam.

It also referred to French air strikes on Isis in Syria, threatening further attacks “as long as it continues its Crusader campaign.”

As well as the stadium and the concert hall, several restaurants were also targeted, including a popular Cambodian eatery in the trendy Canal St. Martin area, where at least 12 people died.

Another 19 people were killed at a busy restaurant on nearby Rue de Charonne.