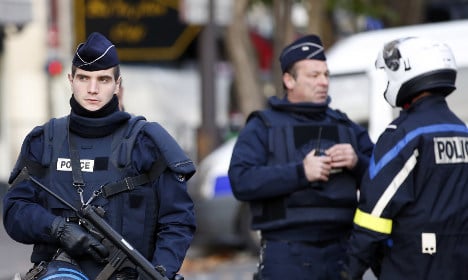 Friday's terrifying massacre was as indiscriminate and therefore as close to home as you can get. Photo: AFP

Despite already being on heightened terror alert, France woke up on Saturday morning in grief, shock and still trembling from the night before.

Newspapers can often be accused of exaggerating headlines, but at first reading the words on the front page of Le Parisien did not feel like hyperbole.
“This time it's war”, the title read, and Le Figaro echoed the theme with the front page headline “War in central Paris”.

And as if the issue was in any doubt, French President François Hollande on Saturday called the attacks “an act of war”.
With hundreds of soldiers called in to patrol the streets of the capital after at least 129 were killed in a coordinated series of cold-blooded shootings and suicide attacks, it did indeed feel like war had come to the world's most-visited city.
And all this just 10 months after the January terror attacks killed 17 people at the offices of Charlie Hebdo, a Jewish store and on a street in the south of the city.
But while the Charlie Hebdo attacks felt like a wake up call to let Paris know it was vulnerable and in the line of sights of jihadists, it did not, and could not prepare us for the bloodshed of Friday.
But then, what could possibly prepare you for eight attackers, armed to the teeth with Kalashnikovs, grenades and suicide vests intent on killing as many innocent people as they could and ready to die to make sure they did?
Even though January's appalling attack on Charlie Hebdo was in the heart of Paris, it felt far enough away for most people, given that the magazine was specifically targeted in a revenge attack for publishing cartoons of Mohammed.
But Friday's terrifying massacre in pizzerias, concert venues, Cambodian restaurants, football stadiums and bars was indiscriminate – and therefore as close to home as you can get.
The coordinated shootings and suicide attacks were in the traditional working class northern suburbs and modern trendy areas of the east of capital.
They occurred far from the tourist hotspots that soldiers have been guarding in recent months.
These were attacks on bars and restaurants in a part of town frequented by the capital's young professionals and students.
The Petit Cambodge restaurant is just a short walk down the canal from The Local's office. We and other foreign journalists have spent many a Friday night drinking in and outside the Carillon bar, where bodies lay across the pavement on Friday night.
The attackers know there's nothing more frightening than being killed just for being in the wrong place at the wrong time on the wrong night.
Friday's carnage perhaps gave us all an insight into what it must have been like for the Jewish community in Paris, who lost four of their members in the January terror attacks just because they were in the wrong supermarket at the wrong time of day and because – in the eyes of gunman Amedy Coulibaly – they were the wrong people.
The victims of the Kosher store attack were like those Parisian victims on Friday night, simply killed for being who they are.
Since those January attacks in Paris, there have been other warnings for France.
In April, there was a foiled attack on a church when a jihadist's plans to kill churchgoers to the south of Paris went awry after he accidentally shot himself in the foot.
Then in June, a delivery driver tried to blow up a factory near Lyon after beheading his boss, and in August there was the now famous attack on the Thalys Amsterdam to Paris train that was foiled by brave passengers.
These near misses registered in the back of our minds but did not change the way we went about our daily lives.
While the army was deployed on the streets of France to guard sensitive sights and tourist attractions, life quickly returned to normal and as the months went by, there was no sign of people living in fear.
Parisians went about their day in the same old way, but it's unlikely things will return to normal so soon this time. If ever.
Social media posts and text messages can attest to the real fear people in the capital feel now.
“Nowhere feels safe now,” “We could have easily been in  that bar,” and “sick of this madness.” were just a few sentiments to sum up the millions of messages and tweets and Facebook posts doing the rounds on Saturday morning.
The question now is how will France react – both the public and the government?
While January's attacks prompted millions to take to the streets across the country calling for unity, the solidarity didn't last long.
The JeSuisCharlie motto was not adopted by all and fiercely rejected in many of the poorer suburbs, where the Muslim immigrant population is high.
There is the hope that Friday's attack will prompt a real unity against the Islamist extremists, but with the extreme-right National Front increasing its influence and even Prime Minister talking of “apartheid” in the suburbs, it may take generations for France to really recover from Friday's atrocity.