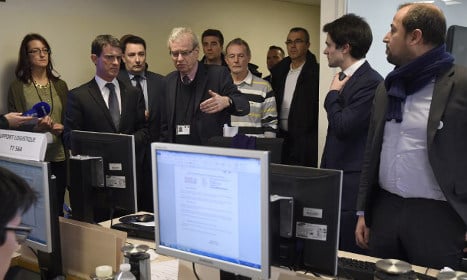 French Prime Minister Manuel Valls (second left) visits the Prime Ministry's Crises Center in Paris, on Sunday. Photo: AFP
In the wake of Friday's terrorist attacks in France in which at least 129 people died, Ranstorp, from the Swedish National Defence College spoke to The Local about what they mean for the future of France.
“France are at war and have been for some time, through the coalition,” Ranstorp told The Local.
“The French have been exercising their military muscle. There has been tough talk, particularly after (the January terrorist attacks on the offices of) Charlie Hebdo.”
SEE ALSO: All the latest of the Paris terror attacks
The terrorism expert explained that close to 2,000 French citizens have been fighting with Isis (or Islamic State, as they are also known. This constitutes one third of Europeans within Isis.
“In some countries it has become more difficult to travel to Syria, in France, however, it (travel) has been accelerating,” he said.
“There have been 17 publicly revealed attacks or foiled attacks in France since the war began in Syria – including the Charlie Hebdo and kosher supermarket attacks in Paris. They’ve been coming in a fast and furious fashion – on a scale that even the best security service can’t counter.”
Ranstorp said it had been a challenge for those security services “to get every puzzle piece in the right place”.
“This is an escalation on this issue. The French have to worry more than most other countries about two fronts – both North Africa and Isis,” he explained
“Why did they attack Paris now? Isis have been losing territory inside of Syria and to some extent in Iraq. They therefore going on the offensive to make up ground after these losses.”
“I’ve been speaking to intelligence agencies in Europe who say that the moment they turn their attention towards Europe we have a problem,” the terrorism expert said.
“It’s not a one-off, it’s going to continue. It may take a while – they’re clamping down.
“The language of Isis – via its spokesperson Muhammad al Adnani  – has been ‘strike against the West, the US, use all means at your disposal,’ Ranstorp said.
The Swede explained Isis and other terror groups were starting to use available encryption services. They had moved their communications onto apps with end-to-end encryption.
“That gives them hyper-mobility. The encryption availability is a major headache. They’re not using Facebook anymore – it takes longer for the authorities to crack these messages,” he said.
“They’re adapting to technological advances, and that creates new challenges for security forces. There’s always been terrorism, but they’re skilfully adopting new techniques.
“This is going to continue, no matter what the French authorities throw at it. The French authorities have been good at repression – they find it, they clamp down on it, and they throw people in jail. But jails also become incubators. And segregation makes it easy to recruit young, angry men, who get the chance to become a hero in an unfolding, end-of-times battle.”
Ranstorp said he had briefed the French interior minister on the issue and that for the minister there was a heavy focus on ideology as a driving force.
“They’ll focus a lot on repression now,” he said of the future approach of French authorities.
“If it gets too tough in one country, they may move to another country.”
Speaking to The Local, Ranstorp played down the link between Syrian refugees arriving in Europe and terror activity conducted by Isis.

“There’s very little correlation between Syrian refugees and Isis plotting – it’s not a major problem. Of course if you want to change your identity, that’s one way to do it. But based on evidence from before the refugee crisis, it didn’t seem to be a major issue.”
“There were very few cases in which they (Isis activists) had tried to seek asylum under a false identity.”
Url copied to clipboard!