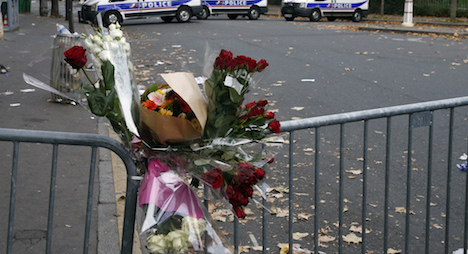 Flowers left close to the Bataclan theatre, the site of the deadliest of Saturday's attacks. Photo: Patrick Kovarik/AFP

Prime Minister Manuel Valls said Sunday that 103 bodies had been identified from Friday's attacks in Paris, with 20 to 30 more still awaiting identification.

“They will be (identified) in the coming hours,” said Valls outside the Ecole Militaire where a centre has been set up for victims' families. The death toll has been put at at least 129.

Here's what we know so far about the victims:

– ALGERIA: Two Algerians were killed, the official APS news agency said, citing diplomatic sources as saying the victims were a woman aged 40 and a man aged 29.

– BELGIUM: At least three Belgians were killed, according to the Belgian foreign ministry.

Press reports said they included Elif Dogan, 26, and Milko Jozic, 47, who had been living in Paris for four months. The third victim was reported to be 28 and also have French dual nationality.

– BRITAIN: One Briton was confirmed as dead, while the Foreign Office added that a “handful” were feared dead.The man was named as 36-year-old Nick Alexander from Colchester, Essex, who had been selling merchandise at the Bataclan.

– GERMANY: Germany's foreign ministry said one of its citizens was killed, without giving further details.

– ITALY:  28-year-old Valeria Solesin, who had been living and studying in Paris for six years, was confirmed dead by her friends in Paris, though Italian officials have not yet confirmed the news.

– MEXICO: Mexico's foreign ministry in a statement said it “regrettably confirms the deaths of two women as a result of yesterday's attacks in Paris, one with Mexican and Spanish nationality and the other joint Mexican-US nationality.”

23-year-old Nohemi Gonzalez, from California had been studying abroad in Paris and had joint Mexican-US nationality. Mexican officials identified the other victim as Michelle Gil Jaimez, who they said hailed from the port city of Tuxpan in Veracruz.

– MOROCCO: One Moroccan has been killed and another injured, according to the embassy in France.

– PORTUGAL: Two Portuguese nationals are reported to have died, according to the Lisbon government. One of them, Manuel Dias, 63, was a driver and had just dropped off three passengers near the Stade de France, where he was killed.

The other, Precilia Correia, 35, worked at the FNAC in Paris and was killed at the Bataclan, where she had gone with her French boyfriend, who also killed. Born in France to a Portuguese father and French mother, she had dual nationality.

– ROMANIA: Two Romanians were killed, according to the foreign ministry in Bucharest, giving only first the names of the victims: Ciprian, 32, and Lacramioara, 29. They were celebrating a birthday party at the Belle Equipe bistro and had an 18-month-old child.

– SWEDEN: One person of Swedish nationality was wounded by gunfire and another was killed, according to the foreign ministry, which said it was still verifying the information.

– TUNISIA: Two young Tunisians, sisters who lived in the French region of Creusot and who were celebrating a friend's birthday in Paris, were also killed, according to the Tunisian foreign ministry.

– FRENCH VICTIMS: A full list of the dead and injured has yet to be published, but the names of victims have begun circulating on social media and in local newspapers.

Djamila Houd, 41 – originally from Dreux, west of Paris, Houd was reported to have died at the rue de Charonne, according to L'Echo Republicain.

Thomas Ayad, 34 – Ayad worked for Mercury Records and was at the Bataclan on Friday night. His amateur hockey club posted a tribute to him on Facebook.

Asta Diakite – French footballer Lassana Diarra said on Twitter that his cousin, Asta Diakite, had been killed. He remembered her as a “big sister”. Diarra was playing in the football match against Germany at the Stade de France on Friday night, where another of the attacks took place.

Mathieu Hoche – A colleague at the France 24 TV channel tweeted that Hoche had been killed in the attacks, and that he was young with a six-year-old child.

Quentin Boulanger, 29 – Originally from Reims, he had lived in Paris for several years and was killed at the Bataclan on Friday night, L'Union reported.

Elodie Breuil, 23 – Family and friends confirmed the death of Breuil after using Twitter to try to find information about what had happened after she was separated from friends when fleeing the Bataclan concert.

Lola Salines – The translator was confirmed dead by her father via Twitter, where he thanked those who had helped him find information.

Other US citizens, at least two Italians and a Swiss woman are reported to be injured, while two Brazilians were wounded in the attacks, President Dilma Rousseff said. One was only slightly hurt but the other remains hospitalized, she wrote on Twitter.

On Saturday, Parisians used Facebook to find out information about loved ones they feared had been near the sites of the attacks. The posts served to highlight people’s confusion and heartbreak in the aftermath of the largest act of violence in the French capital since the occupation of the Second World War.

Using the hashtag #rechercheParis (“searching Paris”), people posted photos of friends thought to be at one of the seven sites across Paris targeted by the terrorists. In one typical post, someone tweeted “#RechercheParis our friends who were at Bataclan last night. Pierre Innocenti and Stéphane Albertini.”

Meanwhile, France’s Interior Ministry was on Saturday asking people seeking information about loved ones feared caught up in the attacks to fill in an online form giving a description of the missing person.

Others were using Facebook to reassure friends that they were safe. The social media site launched a new feature encouraging people living or staying in the Paris area to mark themselves as ‘safe’.