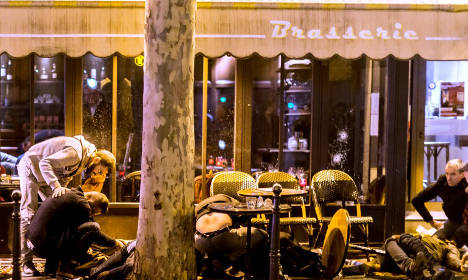 People on the pavement outside the Cafe Bonne Biere in Paris on Friday after deadly terror attacks in the city. Photo: AFP

At least 128 people were killed in gun and bomb attacks in the French capital Friday, in what President François Hollande called “an act of war.”

The coordinated assault came just a day after more than 40 people were killed in twin suicide bombings in a southern suburb of Beirut, in an attack also claimed by Isis (also known as Islamic State).

The jihadist network has repeatedly threatened European countries, including France, with violence.

A video aired in July that featured a French-speaking fighter said Isis would “slaughter you in the streets of Paris.”

But the Paris attacks were the first case of large-scale Isis violence in Europe.

Experts say they demonstrate Isis's evolution from localized operations in Iraq and Syria to the West.

“The push to France likely represents the next stage of Isis,” said Clint Watts, a senior fellow at the Foreign Policy Research Institute.

“We'll see them increasingly move away from conventional and insurgent operations in Iraq and Syria and more towards terrorist attacks in their extended network,” he said.

Since the January attack on the Paris offices of satirical weekly Charlie Hebdo, in which more than a dozen people were killed, French police have detained several individuals with alleged ties to Isis.

The string of incidents, according to jihadism analyst Aymenn al-Tamimi, indicate that “it's questionable to call (the Paris attack) a shift in strategy.”

But it does demonstrate a shift in success rates, Tamimi said.

“It is certainly an unprecedented attack for them in terms of results in Europe. It shows they have sophisticated networks in Europe, not mere lone-wolf fan boys,” he added.

And with France's focus on sectarianism and the high number of French citizens who have joined the ranks of Isis fighters, Paris was a logical target, Tamimi said.

The coordinated attack saw shootings, suicide bombings, and hostage situations at a stadium, a concert hall, and other areas around the French capital.

Charlie Winter, Isis expert at the London-based Quillaia Foundation, said: “This is the logical trajectory for IS's strategy.”

“It's moving away from the expansion and consolidating in Iraq, Syria and Libya to make sure it has momentum now by carrying out attacks in foreign countries like Lebanon, the Gulf and France.”

For Watts, France's delay in “acknowledging its extremist problem” has left room for Isis to build a budding jihadist network.

“France has a serious problem. Per capita, they have some of the highest numbers of foreign fighters heading to and from Syria,” as well as unparalleled “facilitation pipelines for terrorists.”

Lashing out at the West

“A big part of what we are seeing now arises from the glut of foreign fighters currently hanging out in the European Union,” Watts added.

And as governmental efforts make it more difficult for radicalized individuals in France to reach Iraq and Syria, they may “act out at home,” he said.

On Friday, police and a source close to the investigation said a French national is believed to be one of the four men who stormed the concert hall.

Isis's claim of responsibility accused France of “striking Muslims in the caliphate with their aircraft,” and threatened further attacks “as long as it continues its Crusader campaign.”

France is part of a US-led coalition conducting an air war against IS in both Syria and Iraq.

It has carried out air strikes in Iraq for more than a year, extending them to Syria in September.

On Friday, Iraqi Kurdish forces backed by the US-led air coalition pushed Isis out of the key Iraqi town of Sinjar, which lay along a key supply route.

The same day and along the same supple line, a coalition of Arab and Kurdish fighters ejected IS from the village of Al-Hol in northeastern Syria.

And Syrian government forces Wednesday broke a more than year-long siege by IS around an air base in the country's north.

As the jihadist network faces setbacks in areas around its “caliphate,” it may increasingly lash out abroad.

“If Isis can't find success in their region of operations, they are going to extend their violence regionally and in the West,” Watts said.

“Paris seems to be a place where they can do this.”