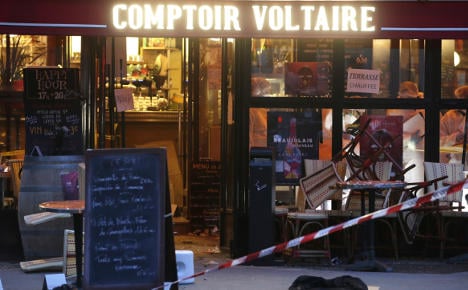 Forensic police search for evidences inside the Comptoir Voltaire cafe at the site of an attack in Paris. Photo: Kenzo Tribouillard/AFP

Security officials and experts have predicted that an unprecedented attack was in the offing, and would be nigh impossible to thwart.

“Determined guys who are prepared to die, who have studied their target and have a solid operational background, they can do a lot of damage,” Yves Trotignon, who used to work for DGSE intelligence agency's anti-terrorist service, recently told AFP.

“More jihadist fighters are graduating as veterans every day. Faced with that, it has to be said, the (security) services are overwhelmed,” he said.

Eight assailants – a mix of gunmen and suicide bombers – killed more than 120 people and wounded over 200 in attacks at seven popular Parisian recreational spots overnight Friday.

Targets included the Bataclan concert hall and eateries around the Stade de France sports stadium where a France-Germany football match was underway.

Also hit was a restaurant in a vibey Parisian suburb near Republique square, not far from the erstwhile offices of the Charlie Hebdo satirical magazine where 12 people were mowed down in January.

The events of Friday were exactly the kind of multi-pronged attack authorities had been dreading.

So far this year they have been fortunate: more than one potential bloodbath was prevented by the offender's own ineptitude.

In April, Algerian IT student Sid Ahmed Ghlam was arrested after he shot himself in the leg by accident, leading police to uncover a plot to attack a church in Paris' Villejuif suburb.

And in August, two off-duty US servicemen and a friend overpowered a gunman who opened fire on passengers on a high-speed train from Amsterdam to Paris.

But the authorities' luck was bound to run out as radicalised Muslims return from warzones battle-hardened and well-trained, said the experts.

And they are coming home in such great numbers that it is impossible to keep tabs on them all.

“The risk is greatest from groups of young men who return hardened from conflicts, maybe in Syria, maybe Libya or Yemen, then obtain weapons here (in France) and go over into action,” Trotignon said.

Since the January slaying of 17 people in joint attacks on Charlie Hebdo, known for its satirical caricatures of Islam, and a Jewish supermarket elsewhere in Paris, anti-terror, intelligence, police and rescue services have been rehearsing for another such multi-pronged assault.

Like anti-terror services the world over, French experts closely studied the Mumbai attacks in November 2008, in which 10 attackers struck five different spots in concert, killing about 170 people.

But plan as they like, the experts agree there will always be an element of surprise.

And things have become complicated by wall-to-wall media coverage – with attackers nowadays positioning themselves “for maximum publicity”, a senior  anti-terror official recently told AFP on condition of anonymity.

“Right now, we fear kalashnikov attacks” – exactly like the one on the Bataclan theatre which ended when police stormed the building, but only after 100 people were killed.