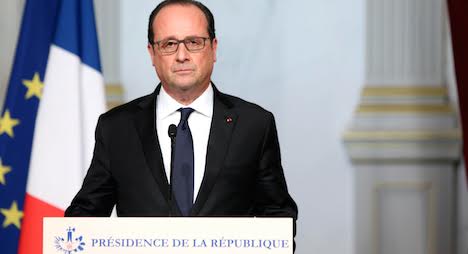 France and its capital Paris went into lockdown on Friday night after a series of terrorist attacks left at least 40 dead, with the attackers still believed to be on the run.

Just before midnight the country's president Francois Hollande declared a state of emergency for the whole country and asked for reinforcements from the army to be drafted into Paris to prevent further attacks.
“They are in the Paris area to be sure that no other terrorist attack can take place,” he added.
Hollande said he had mobilised all possible forces to “neutralise the terrorists and bring security back to those areas affected.”
The head of state spoke of “tens of dead and many injured.”
“It's a horror.
“What the terrorists want is that is to scare us and to instill fear. After what happened there is fear and dread, but up against this is a nation that knows how to defend itself, that knows how to mobilise its forces and which once will defeat the terrorists.”

Hollande held a crisis meeting late on Friday after reports of several shootings, a hostage taking at a concert hall and a suicide bombing near the Stade de France stadium, while France were playing Germany.

After the meeting Hollande announced that France's borders would be closed immediately, meaning effectively no one could leave or enter the country.

He warned that it was not over and that operations were still underway.
He is believed  to have been referring to an anti-terror police assault at the Bataclan concert hall where one of Friday's attacks took place.
Gunmen had stormed the arena shooting at the crowd before taking hostages.
While France's borders zere closed, in Paris an unofficial curfew had been installed with police asking residents to stay at home.”
How long the lockdown will last for, nobody yet knows.
Url copied to clipboard!