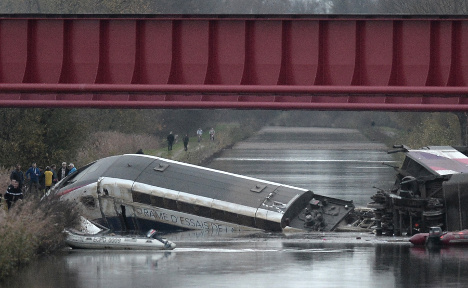 The victims were among the team of 49 technicians aboard the train. There were no other passengers.

The train was running at around 350 kph (217 mph) on a high-speed line as part of testing for the next generation of TGV due to go into service in Spring 2016, a source close to the inquiry said.

Another 37 people were injured, including 12 emergency cases, local officials said.

The train ended up near a bridge in the water of a roughly 40-metre (130-foot) wide canal. The accident happened “because of excessive speed” at Eckwersheim in eastern France as technicians were on board for testing, said Dominique-Nicolas Jane, a senior official in the Alsace region.

However, police said the cause of the crash had not been determined. A source close to the investigation said dozens of technicians were aboard.

The accident is the first fatal accident since the TGV (“train grande vitesse” or high-speed train) went into service in France in 1981.

The damaged silver and black front on the train could be seen lying in the canal under a bridge, with the next carriage straddling the bank and the water.

A great plume of black smoke could be seen from several kilometres (miles) away, including from the suburbs of Strasbourg near the German border.

Youngsters playing at a nearby skate-park spoke of acrid fumes.

A police dive team, helicopters and tens of rescue vehicles were sent to the scene in response to the crash.

The accident occurred in a non-residential area, though with some house-boats elsewhere along the canal.

Royal called it “an apocalyptic scene” and expressed her solidarity with the family of the victims.

While there have been derailments of French TGV trains in the past none have had this kind of tragic outcome. Previously the worst train accident in France in recent years occurred in July 2013 when a commuter train derailed in a Paris suburb killing seven people and injuring dozens more.

In the same month 80 people died when a high-speed train went off the rails and ploughed into a siding in neighbouring Spain.

However there were no signs that the train derailment was anything other than an accident during testing.

In August a Moroccan man was overpowered by two young American servicemen after he opened fire with a Kalashnikov on board a TGV train between Amsterdam and Paris.

The new trains are designed to provide speedy journeys from Paris to to eastern France and eventually into Luxembourg.