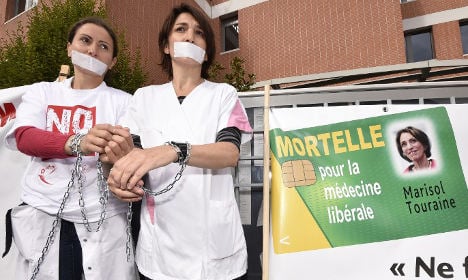 Private doctors demand the resignation of Marisol Touraine bill during a protest in Bordeaux on October 3rd. Photo: AFP

The strike, called by five key health worker's unions representing some 104.000 health professionals, will see many doctors' surgeries around the country closed and some planned operations in private clinics postponed.

The industrial action is planned to run until Monday November 16th, with business as usual not resuming until the following day.

Public hospitals will be left to bear the brunt of the burden of staff shortages during the strike, staying open to deal with emergencies. Toulouse, Lyon and Grenoble are expected to be particularly hard hit.

Meanwhile, the Health Ministry has assured the French public it has taken precautions so each patient can receive adequate treatment.

Friday's industrial action is the latest battle in a sometimes fierce ongoing war between health workers and the French government. In fact, even more people will be affected by Friday’s protests than by previous strikes, as dentists and nurses are set to join GPs, specialists and surgeons.

It comes as French MPs gear up for a full debate of a new health reform bill, which includes clauses banning skinny catwalk models, prohibiting the incitement of anorexia, and outlawing the advertising of sunbeds.

But the issue that is particularly bothering doctors is that patients will no longer need to pay doctors up-front for treatment, starting from 2017. Under the new rules, doctors’ fees would instead be refunded by insurance bodies, a system which is already in place for pharmacy medicines and low-income patients who fit certain criteria.

The measure was voted down by the French Senate, but was reinstated by MPs this week with the health bill due for another debate in the lower house next week.

Doctors claim that the change would mean extra paperwork and longer waits for them to receive payment, while also signifying a loss of control for healthcare professionals.

There is also a worry that if patients see healthcare as free, more people will visit the doctor when it is not necessary, placing extra burden on France’s health service.

Protest marches against the reform in March saw thousands take to the streets of Paris. According to the organizers, up to 50,000 took part in protests, though police estimates placed the figure at a more modest 19,000.

If you are ill today and need medical attention, BFM TV recommends trying to make a doctor's appointment using the online platform Doctolib, which operates in 15 major French cities and in key regions.

If that option fails, you can also call ambulances services (Samu) by dialling 15 to discuss your symptoms. They will be able to direct you to emergency services if that is necessary.

Pharmacies may also be able to help, but visiting your hospital emergency services unit should be a last resort, BFM TV advises.