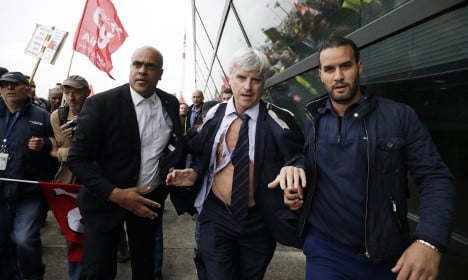 Pierre Plissonnier looking the worse for wear after the October protest over job cuts at Air France. Photo: AFP

In pictures carried by media across the world, human resources chief Xavier Broseta, naked from the waist up, had to scale a fence after he was pursued from a meeting about restructuring proposals at the troubled airline.

Another executive, Pierre Plissonnier, also had his shirt and jacket ripped.

The violent protests took place at Air France-KLM's headquarters on the outskirts of Paris on October 5th as management were announcing a plan to cut 2,900 jobs.

The five workers engaged in “serious misconduct” during the scuffles, a spokesman for the airline told AFP.

The men, aged 35 to 48, were arrested and will stand trial on December 2nd for their alleged roles in the violence. Four work for the airline's cargo arm and the other is an employee of Air France Industries. Miguel Fortea, secretary general of the CGT union at Air France, told AFP that the five men were fired “without compensation or notice”.

A sixth person who was also arrested over the violence is no longer facing accusations of physical aggression, the airline said.

Overall, Air France has launched disciplinary procedures against 18 employees over the unrest.

The sanctioned workers now have 10 days to appeal, it added.

Union representatives condemned the latest developments, claiming that the footage used by the company to attribute responsibility could not actually be used to single anyone out.

“It's just a joke,” a member of one union, Force Ouvriere, said. “You can't see anyone hitting anyone.”

“It's inadmissible and we won't let this go,” Mehdi Kemoune of the CGT union told AFP.

The unions have demanded that the disciplinary measures be put on hold until the police inquiry is complete.

The incident came at a time of rising tensions at France's national flag carrier as the airline, facing intense competition from global rivals, seeks to persuade its pilots to adopt more flexible working practices.

It wants pilots to fly 100 more hours a year for the same salary.

A two-week strike by the pilots in September 2014 crippled the airlines and cost €416 million ($448 million) in turnover.

However, the airline announced in later October it had raked in €480 million in profits in the third quarter of 2015, up €400 million on a year earlier.