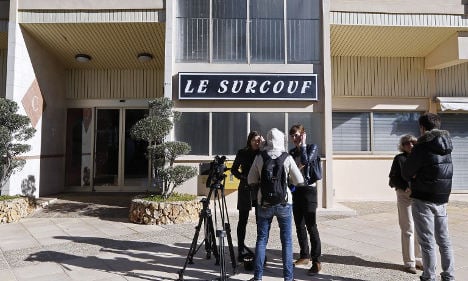 The Central Directorate of Homeland Intelligence building in Mandelieu-la-Napoule was evacuated during investigations into Cannes-Torcy cell. Photo: AFP

Judges will now decide whether the trial will go ahead.

When it was dismantled in late 2012, the “Cannes-Torcy cell” was branded by counter-terrorism officials as the most dangerous jihadist group in France.

It was said to be planning numerous attacks, including against soldiers in the south of France, and had ties to Syrian jihadists.

Police arrested members of the cell, now aged between 21 to 32, while investigating a grenade attack on a Jewish grocery in the Paris suburb of Sarcelles in September 2012.

Two masked men threw a grenade into the grocery, injuring one person, but the fact it rolled under a trolley prevented worse injuries.

Police found bomb-making equipment in a storage unit rented by Jeremie Bailly, 28, the alleged leader of the group.

Another suspected member, Jeremie Louis-Sydney, a petty criminal who had converted to radical Islam, was killed in October 2012 when police came to arrest him at his apartment in the eastern city of Strasbourg.

Another three members of the group, all from Cannes, left for Syria shortly before the police operation.

Two of the men – Ibrahim Boudina and Abdelkader Tliba – were arrested after their return.

Boudina is accused of planning an attack somewhere on the French Riviera after he returned to France in April 2014.

The third, Abdelkader Tliba, has still not returned and is thought to have risen within the ranks of the Islamic State group.

Prosecutors have called for him to be tried in absentia.