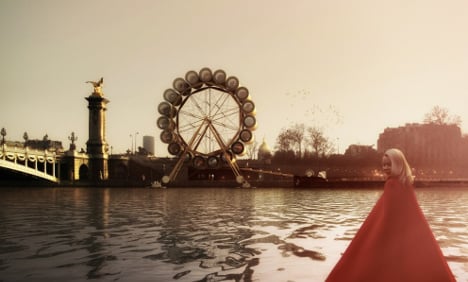 If it gets the green light the so-called Wheel Hotel would certainly be the quirkiest establishment in the French capital.

The hotel, which is the brainchild of French architects firm SCAU, would be built in the form of the London Eye with each of the 19 pods being a hotel room that would constantly rotate.

For the moment, the hotel is still just a plan, while the architects seek investors to help their idea become a reality

The cost of constructing the hotel, which would be made of wood, is estimated at €2 million.

Under French regulations for temporary structures, the hotel will not be permitted to remain in a single site for more than six months.

Architects say it can be built and taken down in four days and can be transported by barge to other areas of the capital. When stationary, the barge would function as a bar and restaurant, where guests would wait for the “capsule” to descend. The pods would make one complete rotation every 30 minutes.

At 30 metres tall, the wheel would be just a quarter of the size of the London Eye, but this is still five metres taller than an average building in central Paris. Each room will be soundproofed and have its own en-suite bathroom, with tanks fitted under each pod to collect waste water. Rotations of the wheel take 30 minutes, meaning guests wouldn't have to wait too long when they wanted to enter or leave the wheel. Another possibility is that the hotel will open in Bordeaux, where the architects say there is less red tape than in the capital. A night in the hotel won't come cheap, however, with pods set to cost between €300 and €400 euros per night.

Earlier this month The Local reported how Paris was set to get its first floating hotel on the River Seine.

The hotel, named Off-Paris Seine, is to be located along the Quai d’Austerlitz, which was until recently the setting for unofficial refugee camp.

It will be located near the Charles de Gaulle bridge, just ten minutes' walk from Notre-Dame Cathedral.

The three star hotel is to house 54 rooms and four suites and, according to those behind it, will be “totally innovative and with no equivalent in Paris.”

It has cost in the region of €11 million to build.