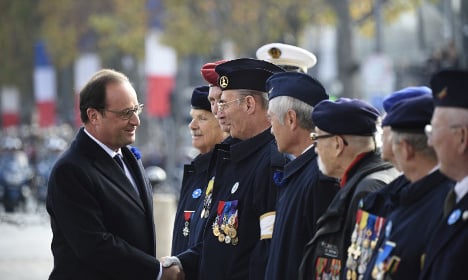 What are we remembering?

November 11th, known as Le Jour du Souvenir (Remembrance Day) in France, marks the day when Germany and the Allies, including France, signed an armistice agreement in Compiegne, northern France leading to a ceasefire on the war's Western Front. The war, which claimed over 17 million lives, dragged on elsewhere for several months and would not 'officially' end until the Treaty of Versailles was signed in June the next year.

Since 1922, the day has been a public holiday across France. Workers in Belgium and Canada also have the day off, but in most countries, people are still at work.

How does France commemorate the armistice?

Former presidents Nicholas Sarkozy and Jacques Chirac joined President François Hollande and other ministers this morning at Paris's Arc de Triomphe to take part in the annual Remembrance service. Hollande saluted war veterans and their families in front of the Tomb of the Unknown Soldier next to the iconic monument. The names of four French soldiers who died in service in 2015 were read out before the minute's silence.

Hollande also paid tribute to former German Chancellor Helmut Schmidt, who passed away yesterday, and stated the need to continue good relations between France and Germany.

Like many other nations, France marks the signing of the armistice with a minute of silence at exactly 11am on November 11th each year. The 60-second silence provides a moment to contemplate and remember those who served and lost their lives for their country, not just in the First World War but in other wars too.

In France, the bleuet or cornflower is used as a symbol of remembrance alongside the poppy, which is used in countries belonging to the Commonwealth of Nations. The flower was chosen because cornflowers have traditionally symbolized “pure and delicate” sentiments, while blue is one of the colours of the French flag, and was also the colour of many soldiers' uniforms in the First World War. Profits from the sale of cornflower brooches go to aid organisations assisting victims of war including veterans, orphans and widows. Hollande wore the blue flower during this morning's service.

Some 87 percent of French residents are in favour of continuing to commemorate the armistice publicly, according to a survey for BFMTV, published on Tuesday. A slightly lower proportion, 84 percent, believe that November 11th should continue to be a public holiday in France.

Memorial group Le Souvenir Français is campaigning for graves of soldiers to be restored. The First World War was the first time soldiers killed in combat were buried in individual tombs rather than in mass graves; each tomb was marked with the words 'Mort pour la France' (Died for France). The 265 military cemeteries around the country contain the remains of around 740,000 soldiers, but Le Souvenir Français says many of these graves are falling into disrepair and wants to protect them.