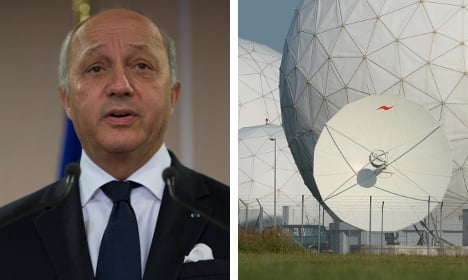 Fabius, who has been Foreign Minister in President François Hollande's government since 2012, is the highest-profile target yet to surface in leaks about spying by the Bundesnachrichtendienst (BND).

The experienced Socialist politician – who was also modern France's youngest Prime Minister under President Francois Mitterrand in the 1980s – has been at the heart of many of the world's crises over the past three years.

He has been Hollande's right-hand man in Europe's face-off with Russia over Ukraine, in nuclear talks with Iran, and over deployments of French troops to African flashpoints including Mali and the Central African Republic.

Fabius is also heading up France's mission to wrangle the nations of the world into a successful deal at the COP21 climate change summit to be held in Paris next month.

“The duties of the BND do not include political reconnaissance work against partner countries,” she told reporters.

She added that BND chief Gerhard Schindler still had the “full confidence of the German government”.

Haber's previous positions, first as head of an EU observation mission to Georgia following that country's 2008 war with Russia, and secondly as head of the planning office at the EU diplomatic service, made him a juicy target.

As a German citizen, the BND ought not to have been able to touch him without authorization from MPs.

Foreign ministry spokesman Martin Schaefer said German diplomats as a rule took precautions against snooping but did “not expect to be spied on by the BND”.

Three MPs on the Bundestag (German parliament) committee of inquiry into the country's spy services are set to present a report on Wednesday on a 900-page list of the BND's targets – a list they have examined in recent weeks.

The committee chairman has himself been the target of hacking and phone tampering.

The BND may well be tipped into a fresh crisis over what RBB calls “highly explosive” information that the MPs are expected to reveal.

RBB reports their questionable targets included the International Criminal Court at The Hague, UN children's agency UNICEF, the World Health Organization, the FBI and US state broadcaster Voice of America.

Many American and European firms, including US arms company Lockheed Martin, are also on the list.

The latest news report on the BND spy service fuels a debate in Germany about state surveillance that was kicked off by the revelations of fugitive US intelligence contractor Edward Snowden.

Cases of spying on friends – expected to include many ministries, government offices and embassies belonging to European allies and the US – are particularly embarrassing for Chancellor Angela Merkel.

Merkel famously said that “spying among friends is not at all OK” after learning of spying on Germany – and her own phone – by the US National Security Agency (NSA).

But it has gradually emerged over the course of 2015 that the BND, often in cooperation with the Americans, has itself been very busy spying on its allies – and even its own citizens and companies such as Siemens.

The head of the BND effectively said in May that his agency was forced to spy on targets set by the NSA in exchange for information needed to keep Germany safe from attack.