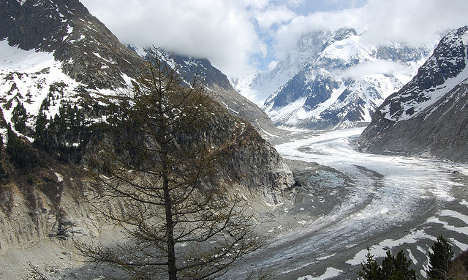 The famous Mer de Glace in the Mont Blanc Massif. Photo: edwin.11/Flickr
The glacier – which is on the northern side of the Mont Blanc massif – lost an average of 3.61 metres in depth over its length since October last year, according to the glacier laboratory of Grenoble.
This is more than three times the average yearly loss, and suggests that the enormous glacier, which has a surface of 32 square kilometres and measures 200 metres deep in parts, is suffering the effects of climate change.
The Mer de Glace usually only loses around one metre each year, a rate which has remained steady for roughly 30 years, noted Christian Vincent, a researcher at the Laboratory of Glaciology and Environmental Geophysics (LGGE) in Grenoble.
In fact, only in 1995 and 2009 did the glacier ever gain depth.
But in the past year, the glacier was particuarly heavily hit by the warmer temperatures, particularly during summer 2015, which saw a heatwave across France.
While thawing during last year's unexpected summer heat is partly to blame for the shrinking of the glacier, whilst low levels of snowfall between October 2014 and May 2015 were another contributing factor.
Researchers noted that another French Alps glacier – Saint-Sorlin – also lost over three metres in depth this year.
“This is an enormous deficit,” said Vincent, adding that all of the glaciers in the French Alps were experiencing the same effects.
If global warming continues at the expected rate, Vincent warns that glaciers in the Alps lower than 3,500 metres in altitude will disappear before the turn of the next century.
Earlier this year The Local reported how Mont Blanc itself, Europe's highest mountain had lost a full 1.3 metres of its height according to the latest measurement. But it had nothing to do with this summer's heatwave apparently.
Watch the video below to see a bird's eye view of the Mer de Glace: