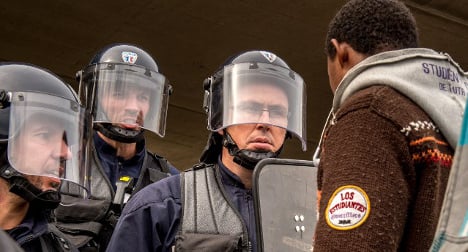 Tensions remained high in Calais on Tuesday, a day after refugees were involved in a running battle with police near the infamous New Jungle migrant camp.

Between 11pm and 4am on Monday night around 250 migrants “repeatedly tried to slow down traffic at the port ringroad, by placing different objects in the road,” a spokesperson for the police told AFP.

“Police had to push the migrants back from the ringroad several times,” the spokesperson added.

Access to the port had been closed off for two hours during the night, then opened and closed again several times.

Then as the night went on, things became more violent, with those living in the New Jungle camp pelting police officers and trucks with stones and pulling down road signs. Police responded by firing tear gas at the migrants.

There was also trouble on Tuesday morning, when at about 9.30 am around 200 to 250 migrants surged onto the Port ring road to try to block it, with several throwing rocks at police.

Riot police arrived on the scene and within half an hour the area had been secured.

Nevertheless, port authorities in Calais are increasingly concerned by the upswing in violence.

“We are no longer dealing with nice migrants, but with troublemakers. Attacks against road users cannot be tolerated, because these are our clients. Some lorries were attacked with iron bars. If this degenerates to guerrilla warfare, the reputation and turnover of the port of Calais will be hit.”

On Tuesday night, an hour-long standoff between police and migrants ended with riot police using tear gas and water cannons, after some of the migrants had thrown objects and insults at officers before lighting a wooden pallet on fire.

“Two-hundred-and-fifty police officers, of which the majority were CRS (riot police), were mobilized Tuesday” to end the disturbances around the migrant  camp, said interior ministry spokesman Pierre-Henry Brandet.

France has stepped up security after the outbreaks of violence, prompting migrants to resort to disrupting traffic on the Calais ring-road.

They have “often entered the property of local residents to obtain objects that can be used to block the trucks on the ring road” leading to the port, head of the Pas-de-Calais region Fabienne Buccio told a press conference.

Sandy, a resident who lives close to the migrant camps, told AFP: “We no longer feel at home. We live with our windows and shutters closed. We cannoteven go into the garden with our children.”

After Sunday's violence Gilles Debove, from the Calais branch of the SGP Police-Force Ouvrière union, told The Local: “The problem is you can't predict what will happen here. We work from day to day.”

Debove added that the vast majority of people in the camp are peaceful, but with security around the Channel Tunnel tightened, migrants are getting more and more frustrated as their attempts to reach the UK are unsuccessful.

French authorities are moving refugees and migrants from the New Jungle to other parts of France to try to relieve pressure on Calais.

The number of migrants in the camp is now said to have dropped to around 4,500 compared to 6,000 in October.

French newspaper Journal du Dimanche claimed the rapid drop in numbers is due to Interior Minister Bernard Cazeneuve's “secret plan” to relocate refugees to administrative centres across the country.

Cazeneuve has come under increasing pressure to act over the squalid conditions of the migrants and it appears he has stepped efforts to relocate refugees around France.

Hotels and other buildings around the country have been transformed into 'Welcome and Orientation Centres' for this purpose.

However, aid associations such as La Cimade are claiming that most of the migrants who have taken part in the scheme simply return to Calais.

They believe the minister is just trying to reduce numbers in the camp in the run up to the regional elections, with the ongoing refugee crisis top of the agenda.

The migrants in Calais are mostly from East Africa and the Middle East, most staying only temporarily in Calais in the hope of ultimately reaching Britain.