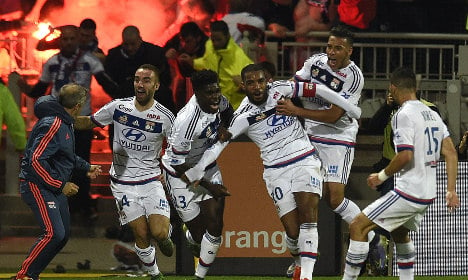 Alexandre Lacazette returned to form in style with a hat-trick as Lyon beat bitter rivals Saint-Etienne 3-0 in the last derby meeting of the teams at the Stade de Gerland on Sunday.

Last season's Ligue 1 player of the year Lacazette opened the scoring in the first half and added two more after the break on his 150th top-flight appearance as Lyon, who will move to a new 59,000-seat stadium early in 2016, claimed the bragging rights in the Rhone-Alpes rivalry.

The victory, Lyon's third in a row in Ligue 1, allows Hubert Fournier's side to go clear in second place, although they remain 10 points adrift of unbeaten league leaders Paris Saint-Germain and also lost captain Maxime Gonalons and centre-back Samuel Umtiti to injury.

Saint-Etienne, meanwhile, are fifth, behind Angers on goal difference, after a disappointing display.

Lyon, who are staring at an early exit from the Champions League following a 2-0 home loss to Zenit St Petersburg in midweek, were unlucky not to get the breakthrough late in the first half when Stephane Ruffier made a double save to deny Jordan Ferri and Mathieu Valbuena.

Valbuena was included in the Lyon line-up at the end of a week overshadowed by the arrest of his France colleague Karim Benzema, who was charged with complicity to blackmail and conspiring to commit a criminal act in an extortion case involving a sex tape featuring the little playmaker.

He put in a lively performance but Lacazette stole the show, opening the scoring four minutes before the break when he spun away from Loic Perrin and then lifted the ball over Ruffier.

Lacazette collected a Valbuena pass and worked his way into a shooting position before stabbing wide early in the second half, but he did find the net again in the 59th minute.

Ruffier saved from a Rafael piledriver but Lacazette followed in to convert the rebound, and he completed his hat-trick in stoppage time when he latched on to Ferri's pass before rounding Ruffier to slot home.

Scorer of a club record 27 league goals last season, he now has six goals in all competitions in this campaign and his performance was a timely reminder to France coach Didier Deschamps, who left him out of the latest national
squad.

“I felt that Alexandre Lacazette was coming good in the last few days. And a hat-trick in a derby — that does not happen all the time,” said Fournier who was also happy to have selected Valbuena.

“Despite what has happened to him, he is happiest on the football pitch. He had already been punished enough by not being selected for the national team.”

Meanwhile, Bordeaux came from behind to beat Monaco 3-1, inflicting a first defeat in 10 games on the principality side.

Monaco are ninth, while Bordeaux move up to 11th, above Marseille, who were beaten 1-0 at home by Mediterranean rivals Nice earlier on Sunday.

Valere Germain, who was born in Marseille when his father Bruno was playing for OM and supported the club as a boy, got the only goal of the game in the 16th minute, collecting a Wallyson Mallmann pass and drilling in a low shot
from range that beat Steve Mandanda and found the bottom-left corner.

It was a welcome win for Nice, who were recently inspired to a fine run of form by the brilliance of Hatem Ben Arfa but made the trip along France's south coast after failing to win any of their previous three Ligue 1 outings.

Claude Puel's side move up to sixth, but there was more frustration for Marseille, who have never really got going under Spanish coach Michel.

After three straight wins in all competitions, this setback leaves OM in 13th place, only three points above the relegation zone.

“I am more disappointed than worried,” said Michel, who had to make do without the injured Romain Alessandrini and the suspended Lassana Diarra, Remy Cabella and Nicolas Nkoulou.

“I don't think it was the absences that made the difference today.”

PSG continued their unbeaten start to the season by thumping hapless Toulouse 5-0 on Saturday at the Parc des Princes.