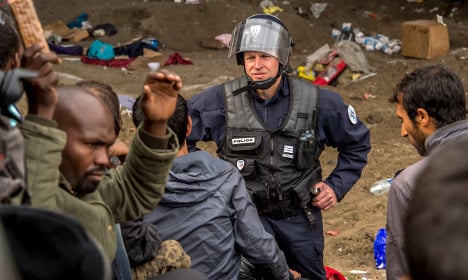 Sunday night saw violent scenes near The New Jungle, a migrant camp in Calais that is home to an estimated 6,000 refugees.

The trouble began after 200 refugees blocked off the highways that leads into the Channel Tunnel at around 11pm.
When police arrived on the scene, the refugees began throwing rocks at them. In response, police fired 300 tear gas canisters at the migrants. Calm was restored to the area at around 1am.
Initial reports suggested 16 officers were injured but police union leaders told The Local on Monday that in fact 26 officers were hurt by the missiles thrown by migrants, though none seriously.
“This is the first time that it has been so violent and that we've had so many injured colleagues, unfortunately,” Gilles Debove, from the Calais branch of the SGP Police-Force Ouvrière union told The Local.
He added that officers were concerned about the potential “madness” if there was ever any kind of revolt from those inside the camp.
“The problem is you can't predict what will happen here. We work from day to day,” Debove said.
“In all honesty we just don't know what the solution is to this crisis. There are 6,000 people living in this camp. We will do our job and do it with courage but the officers are very downbeat. They have 26 injured colleagues.”
Clashes between police and refugees have become a regular occurrence although Sunday night's violence was far worse than normal.
Debove added that the vast majority of people in the camp are peaceful, but with security around the Channel Tunnel having been tightened, migrants are getting more and more frustrated in their attempts to reach the UK.
The migrants in Calais are mostly from East Africa and the Middle East, most staying only temporarily in Calais in the hope of ultimately reaching Britain. (Photo: AFP)
Tensions towards refugees in France have proved palpable lately.
“They don't normally act like that and attack lorries. They are normally pretty discreet but it's becoming very tense,” Debove told The Local.
On Saturday night in Nantes, western France, unknown assailants threw two Molotov cocktails into a building that's home to 40 squatting refugees.
“Whoever did this wanted to kill us, for sure,” one of the refugees told France TV info.
While none of the squatters were injured, the explosive landed in an area where several people usually sleep. They were not at the scene, however, at the time of the attack.
The migrants, who have lived in the home for a year, chose not to call police for fear they may be deported.