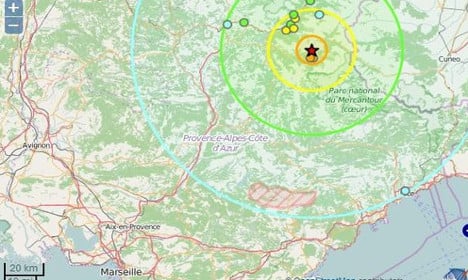 No, you weren’t dreaming.

If you were in the south east of France, you may have felt the earth shake for a few moments on Friday morning.

The earthquake measured 4.4 in magnitude according to France’s Central Office of Seismology, which wasn’t significant enough to cause any major damage.

“I was going to work when I heard a kind of thud, followed by shaking. It lasted four seconds,” Pierre Morin from Saint-Etienne-de-Tinée told Nice Matin newspaper.

It was followed by several minor aftershocks.

The epicentre of the tremor was near the town of Barcelonette, but the minor quake was felt as far away as Nice, around 100km away.

While France is not in a high earthquake risk zone, parts of the country are regularly hit by tremors, including Brittany.

According to the France Seismology Office, Friday’s quake is the fifth to hit the region this year.

Friday’s quake was the biggest to hit the south of France since April 2014, when a tremor measuring, 5.2 on the Richter scale shook the ground.

Following that quake, an expert told The Local France it should act as a wake-up call because an even bigger quake is due to “hit the region and there will be fatalities.”

“We don’t know when a big one will come, but it will and there will certainly be fatalities,” said French seismologist Remy Bossu from the European Mediterranean Seismological Centre (EMSC) in Paris

The last time France was hit by a deadly tremor was back in 1909 in the town of Lambesc in Provence, which left 46 people dead and 250 injured. (See photo) The earthquake measured around 6 on the Richter scale and is the still the largest quake ever recorded in mainland France.

EMSC’s Bossu says deadly quakes of that scale hit France roughly every 100 years, so based on averages a big tremor is due.