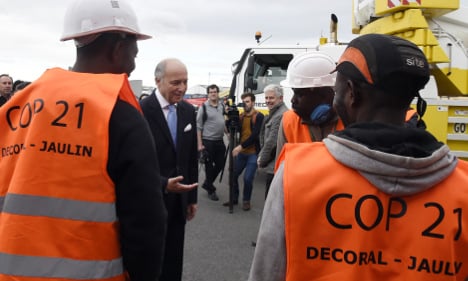 French Foreign Minister Laurent Fabius talks with workers at the COP21 construction site. Photo: AFP
The three-day huddle seeks to target areas of possible compromise ahead of a year-end summit in the French capital tasked with inking the first ever universal agreement to rein in climate-altering greenhouse gases.
It will be a chance for ministers to examine a rough draft of the deal that remains little more than a laundry list of opposing options, despite months of haggling.
“It… can help build understanding and trust between ministers, which will be essential in the end game at Paris,” said analyst Jennifer Morgan of the Washington-based World Resources Institute think-tank.
The November 30-December 11 Conference of Parties (COP) — the 21st such gathering — will be opened by more than 80 heads of state and government including US President Barack Obama, China's Xi Jinping and Narendra Modi of India.
The idea is for leaders to provide political impetus for the final round of talks by rank-and-file negotiators and their ministers.
The “pre-COP” meeting from Sunday to Tuesday brings together all the negotiating blocs, and includes top envoys from all major carbon polluting
nations — China, the United States, the European Union, India, Brazil and others.
It is the third such ministerial meeting in Paris this year, and will tackle make-or-break issues such as burden-sharing for slashing emissions and climate finance.
“The ministers are expected to provide political guidance to help the Paris climate conference reach a successful outcome,” said Mohamed Adow of Christian Aid, which defends poor countries' interests at the talks.
“The French COP 21 presidency needs the ministers… to set the negotiations on course to success.”
Last-minute deals
According to the rules, ministers cannot alter the 55-page blueprint for the Paris deal, crafted by bureaucrats over years of technical talks.
But they can anticipate the last-minute deals that will be needed to unlock an agreement.
The overarching goal is a global pact on curbing emissions to limit average Earth warming to two degrees Celsius (3.6 degrees Fahrenheit) over pre-Industrial Revolution levels.
The last negotiating round in Bonn in October saw squabbles along well-rehearsed fault lines of developed vs developing nations.
Developing countries insist rich ones should lead the way in slashing emissions because historically they have emitted more pollution.
Developing nations also want assurances of financing to help decarbonize their economies and shore up defences against the impacts of superstorms, drought, flood and sea-level rise.
But industrialized countries point the finger at emerging giants such as China and India spewing carbon dioxide as they burn coal to power expanding populations and economies.
These crux issues will ultimately be settled at the political level.
“The ministers have only the second week of the COP to reach agreement on a number of difficult issues, so the pre-COP gives them a head start on that,” said Martin Kaiser, head of international climate politics at Greenpeace.
“Paris will be a legal climate agreement, and only political leaders can deliver that.”
Much work lies ahead outside the 195-nation UN climate forum, including a G20 summit in Turkey this month where the thorny issue of climate finance will be discussed.
The Paris pact will be supported by a roster of national carbon-curbing pledges, but over 150 commitments submitted to date place Earth on track for warming of about 3C, analysts say.
Last month, scientists said the first nine months of 2015 had been the hottest on record worldwide.
By Mariette Le Roux