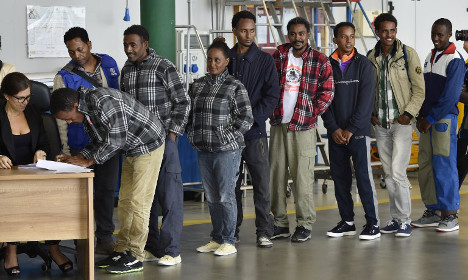 Eritrean refugees in Rome preparing to be redistributed across Europe. Photo: AFP
Nineteen Eritreans are set to arrive in a town in western France on Friday, marking the first group of refugees that France officially welcomes as part of the EU's redistribution plan.
The Eritreans will be housed in a town near Nantes after arriving by bus from Italy, the Interior Ministry announced on Friday.
The move is part of the bitterly contested “resettlement” plan called for by the European Union in late September, which in total will see 30,000 refugees taken in by France over the next two years, and 120,000 sent around Europe.
But France doesn't appear to be in a rush to get started.
It will take in 200 refugees in November, 300 in December, and 400 in January, the Interior Ministry said on Friday.
France has already taken in around 600 refugees, most of whom are Syrians arriving from Germany in September. But that move was aimed at relieving some of the pressure on Germany as refugees poured in from eastern Europe.
The numbers being taken in by France were in stark contrast to Germany, where authorities announced that 181,000 asylum seekers entered the country last month alone.
And that figure was 17,000 more than the number who arrived in September.
Germany's Interior Ministry said that almost 760,000 people have entered the country since the start of the year.
France is unlikely to match Germany's approach to refugees for a number of reasons, not least considering that France is in the middle of an economic crisis while Germany is flourishing.
Other factors include France's high birth rate compared to the lower rate in Germany, a strong far-right political presence in France, and a fear of terrorists after the January attacks in Paris.
France also has other problems on its home soil already, such as being criticized for overlooking the thousands of migrants already living in squalid camps in Paris and Calais.
The hurdles don't stop there. Many refugees prefer to find a life elsewhere after being put off by France thanks to talk of high unemployment, a stuttering economy, and the reams of red tape and language difficulties.