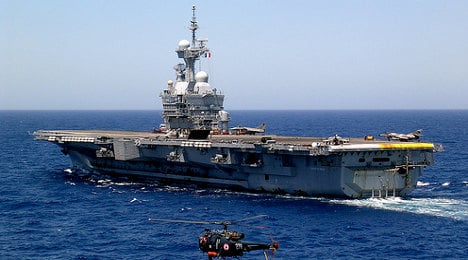 The French presidency on Thursday said it would deploy its Charles de Gaulle aircraft carrier to boost its operations against the Islamic State group in Iraq and Syria.

The presence of the nuclear-powered aircraft carrier, the flagship of the French navy, will add to the six Rafale jets stationed in the United Arab Emirates and the six Mirages flying out of Jordan.

The Charles de Gaulle did a two-month stint in the Gulf from February, from where strikes against Isis in Iraq were carried out, before returning to its base in the French port of Toulon.

During this time about 20 aircraft carried out 10-15 combat sorties a day, according to the army.

France launched air strikes against the jihadists in Syria in October, after a year of bombing Isis in Iraq, saying it was acting in self defence.

France was hit by a jihadist attack in January that left 17 dead and has foiled several other attempted attacks.

The country fears hundreds of citizens that have left to fight with Isis in Iraq and Syria will return to launch attacks on home soil.

Since beginning operations in Iraq, French fighter jets have carried out 1,285 aerial missions, resulting in 271 strikes and the destruction of 459 targets.

Only two known strikes have so far been carried out in Syria.