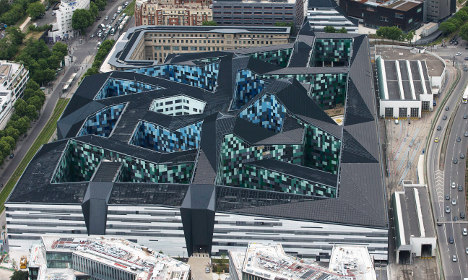 A view over France's new Ministry of Defence. Photo: AFP
Where is it?
The building is located on the southern edge of the city near Metro Balard, in the 15th arrondissement of Paris. It's due to this location that some refer to it as the “Balargone”, a reference to the US Pentagon. It has also been dubbed the “French Pentagon”.
It doesn't, however, have five sides like its US counterpart. What is it used for?
It will be primarily used as a command centre to oversee operations, built to replace a spread of sites that were previously dotted across Paris. Its walls can withstand a missile strike.
The 16.5 hectare area will provide a base for 9,300 military members from the navy, army, and air force. It marks the first time all three departments of the defence force will be grouped together, a move that the minister said will help mobilize the force quicker.
The building also boasts restaurants, a hairdresser, three daycare centres, and plenty of green space on the inside. It also has a swimming pool, which will be open to the public and which cost €30 million. There is so much on offer, in fact, that the BFM TV channel referred to it as a “city within a city”.
Defence Minister Jean-Yves Le Drian will not move to the new building, however, preferring to remain at his office close to Parliament and the presidential palace.
Who designed it?
Nicolas Michelin was one of the main architects behind the plans, which were finalized in 2007. Work began in December 2011, meaning the building took around four years to complete. It was carried out by construction company Bouygues SA.