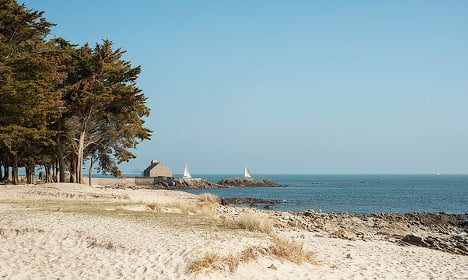 A file image of a beach in Brittany's Trinité-sur-Mer. Photo: Alexis Courtois/Flickr
The bodies were found by a walker, washed up at a beach at Trinité-sur-Mer in southern Brittany (see map below).
Police who were called to the scene were unable to identify the bodies, but found an abandoned car not too far from the shoreline.
Officers managed to trace the vehicle back to the owner's residence, where they found letters explaining the actions of the elderly siblings.
The sisters, aged 75 and 76, had even left instructions for their funerals, reported the Metro newspaper.
The women noted in their letters that they had decided to take their life after one noticed she had the same symptoms of an incurable disease that the other sister was already suffering from.
The story echoes a similar joint suicide in Paris that made headlines at this time in 2013, after a couple in their eighties took their lives after checking into a luxury hotel for the night.

Georgette and Bernard were discovered dead, hand-in-hand, in their bed by a member of staff.  Two letters were left by their bedside. One of them contained a scathing attack on France’s prohibition of euthanasia.

“By what right can a person be forced into a cruel [situation], when they wish to end their life peacefully?” asked the letter
France has one of the highest suicide rates in Europe, with one study finding that the French were more than twice as likely to commit suicide compared to their neighbours in the UK and Spain.
SEE ALSO: French farming hit by suicide every two days