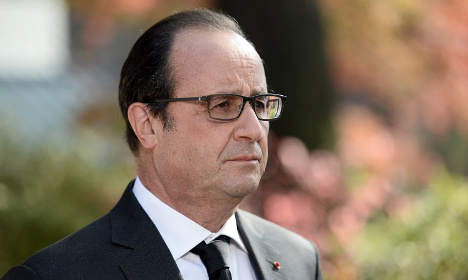 French President Francois Hollande. Photo: AFP
President Francois Hollande is the 16th most powerful person in the world, according to Forbes.
The ranking was low enough to leave him behind the likes of British Prime Minister David Cameron at 8th, US investor Warren Buffett at 13th, and Mexican Telecom magnate Carlos Slim Helu at 15th.
Despite all this, Hollande actually jumped a place from 17th in last year's ranking.
Forbes notes that in the face of a 17 percent approval rating, the French president is taking “bold steps to turn his office around” pointing to the purging of long-standing ministers from his cabinet and joining the US in the Isis air strikes.
“Hopes are not high that François Hollande will be able to fulfill his May 2012 election promise to balance the budget of the world's fifth-richest country ($2.9 trillion), particularly with French unemployment at a new record high of 3.4 million,” Forbes noted.
The magazine also singled out the fact that Hollande had suffered from the explosive memoirs of his ex, Valerie Trierweiler.
“How did Hollande fare in this year's attacks by his former lover in a bestselling memoir? As one columnist put it, “The president has been stripped naked. Naked as no president has been before him.”
Christine Lagarde, who heads the International Monetary Fund, was another notable French name on the list, finishing in 23rd place.
German Chancellor Angela Merkel finished second in the list after overtaking US President Barack Obama, who had to make do with third place in the rankings, a choice Forbes explained by the fact he is coming to the end of his time in office.
For the second year running the US magazine considered Russian President Vladimir Putin to be the most powerful figure in the world.
Putin's position at the top of the charts was explained by the fact that “he is one of the few people in the world powerful enough to do what they want – and to see it through.”