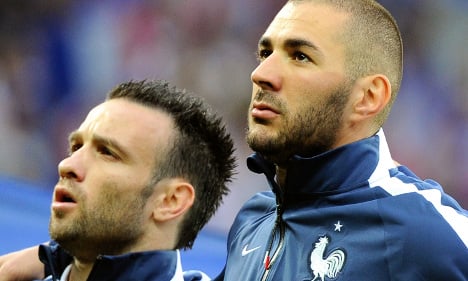 Valbuena and Benzema sing the French national anthem. Photo: AFP
Benzema, 27, has been charged with “complicity in an attempt to blackmail” and conspiring to commit a criminal act, the prosecutor's office in Versailles, outside Paris, said.

The charges, which carry a prison sentence of at least five years, came hours after Benzema had reportedly admitted his “involvement” in the case.
“Karim Benzema has admitted speaking to Valbuena at the request of a childhood friend, who was approached by three blackmailers who were in possession of the sex tape,” a source close to the investigation told AFP.
According to player's lawyer however Benzema denied any attempt to extort money from his teammate.
Benzema’s lawyer Sylvain Cormier, told reporters that his client was innocent and took no part in any blackmail.
Following the news French team manager omitted both players from his squad to play two friendlies against Germany and England. The French squad has been thrown into turmoil as it prepares for next year's European Championships on home soil.
Under the rules of the charges Benzema is forbidden from contacting Valbuena.
Earlier Benzema, 27, was driven away from the police station in Versailles outside Paris in a police car with tinted windows. he was taken to a see a judge, who talked with the star for around an hour before deciding that he should be charged.
The decision to charge the player – often described as “playing under formal investigation” does not suggest prof of wrong doing, rather that prosecutors feel they have serious grounds to pursue the matter. However it does not mean Benzema definitely faces a trial.
Investigators are trying to determine the extent of Benzema's involvement in an attempt to extort money from Valbuena after a sex tape found its way into the hands of suspected blackmailers. (Benzema was kept overnight by police in Versailles. Photo: AFP)
According to an investigation source, Benzema mentioned the video to Valbuena when the French national team met for training last month, ahead of matches against Armenia and Denmark.
According to reports Benzema came to the attention of investigating officers after the three principal suspects in the case were placed under surveillance, which included phone taps.
During their conversations the suspects, who were charged back in October and remanded in custody, talked about the “involvement” of Benzema, in trying to convince his fellow France player Valbuena to pay up.
Benzema's lawyer said he had played “no part” in the plot and was keen to clear his name.
“Karim Benzema has absolutely nothing to hide,” said lawyer Sylvain Cormier.
“He is happy, satisfied even, to finally put an end to this tiresome controversy.”
The centre-forward is a key part of the French national team with 27 goals in 81 appearances and is one of the biggest names in the star-studded Real Madrid squad.
Speculation has begun to swirl in the French media about how Benzema's involvement in the blackmail could affect his place on the national side.
Didier Deschamps, the manager of the French national football team, has stressed in recent years the importance of his players having “impeccable attitudes”.
Later on Thursday Deschamps excluded  both players from the France squad named on Thursday for two internationals this month.

The coach refused to comment on the legal case but said Benzema was injured and not available to play for Real Madrid or France anyway.
He added that Lyon playmaker Valbuena “isn't in the best psychological condition because of this affair so I decided to let him rest during these games.”
“The best is to let justice do its work and take the decisions it has to,” Deschamps said.
Past controversies
It is not the first time the French striker Benzema has been embroiled in a police investigation.
In 2009, he and teammate Franck Ribery were accused of sleeping with under-age prostitute Zahia Dehar. (Benzema, call girl Zahia Dehar and Ribery. Photo: AFP)
Both men were finally cleared of wrongdoing five years later, by which time Dehar had become a reality TV star and fashion designer.
The blackmail case began in June, when Valbuena lodged a complaint with police after being telephoned by an unknown person who said he had the sex tape.
The caller did not specify a sum of money but said they should come to an arrangement.
Police then took over, posing as Valbuena's business associate in later calls with the blackmailers, who threatened to release the video ahead of the 2016 European Championship, which France is hosting.
The investigation led them to three men, including one who was a close member of Valbuena's entourage and who had direct access to the footballer's phone containing the sex tape.
Two of the group are also said to have ties to Djibril Cisse, another French international and a former teammate of Valbuena at Marseilles, and successfully made him pay up for a sex tape in 2008.
The group used Cisse to authenticate the sex tape, the judicial source said, leading him to warn Valbuena that a video was circulating.
Cisse was detained for questioning last month but was quickly released without charge.
In a bid to speed up the negotiations, the blackmailers contacted a friend of Benzema's brother in Lyon, a man already known to police.
The friend was detained in relation to the blackmail case on Monday and was due to appear before a judge later Wednesday in Lyon.
Blackmail carries a potential prison sentence of five years.
Benzema, 27, is one of Real Madrid's star players alongside Cristiano Ronaldo and Gareth Bale and has a good reputation with managers and fellow players.
He started his career in his home town of Lyon, the club Valbuela joined this summer.
On Thursday France national coach Didier Deschamps is due to name his squad for upcoming internationals against Germany and England. The names of both Benzema and Valbuena would normally be expected to appear on the list.