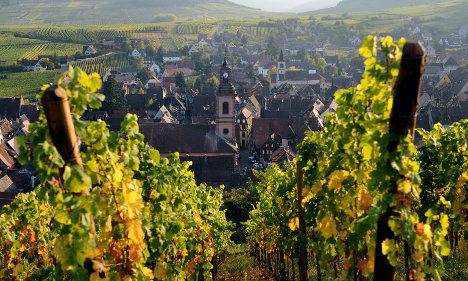 The French eastern village of Riquewihr. Photo: AFP
“We can do just as well as Burgundy,” winemaker Jean-Pierre Frick bragged as he drew a deep-red sample from a huge oak barrel in his cave at Pfaffenheim, near Colmar.
“Our climate is almost more favourable than theirs, and we also have magnificent soil in Alsace,” said Frick, who produces organic red wines with low yields in the chalky terroirs of Strangenberg and Rot Murle.
The soil in the neighbouring winegrowing regions shares the same complexity.
Pinot noir, the only red grape grown in Alsace, suffers from a major commercial handicap because it has not achieved recognition as a “grand cru” — a fine wine — even though it is grown on land that produces “grand cru” whites.
And growers must overcome the relative snootiness reserved for Alsace reds up until a few years ago, according to Frederic Bach, director of the Alsace Winegrowers Association (AVA).
The reputation of the wines as “light and lively, falling somewhere between red and rose” and generally served cooled, in Bach's words, was mainly down to their high yields, which often result in less concentrated flavours.
But all that may change: before the year is out, Veronique Mure and around 15 other growers will ask government regulators to allow them to designate reds from the Vorbourg, Hengst and Kirchberg de Barr growing regions as “grand crus” like their white cousins.
'New phase'
Alsatian reds have come a long way since their heyday in the Middle Ages when they were known across Europe.
In 1969, land given over to reds made up two percent of Alsatian winegrowing land, a share that has grown to 10 percent today.
The quality has improved as well, with “more and more winemakers producing more muscular, robust wines” by macerating the grapes longer, which deepens the colour, and by reducing the yields, Bach said.
Romain Iltis, named France's best sommelier in 2012, includes several Alsatian reds on his wine list at Villa Lalique, a restaurant in northern Alsace that opened in September with a three-Michelin-starred chef.
“Now we have entered a new phase,” he claims, with more and more winemakers joining the red bandwagon.
Among the pioneers is Jean-Michel Deiss, who has been producing a potent pinot noir on the slopes of the Burlenberg in Bergheim, which has a limestone soil similar to that of Cotes de Nuit Burgundy, for four decades.
“My passion for the Burlenberg red changed my view of the way we make wine,” said Deiss, who predicts a “revolution” as Alsace reds improve in quality and potency.
Iltis notes that pinot noir is “so fragile” that mediocrity is not an option, and requires concerted effort to be turned into a high-quality wine.
'Burgundy still the benchmark'
Mure ages her wine in oak barrels from Burgundy, while Frick prefers the traditional old barrels of Alsace, which impart a more neutral taste than new barrels.
“Burgundy remains the benchmark, as the best pinot noirs in the world are produced there,” Iltis said.
It is a view shared by many international wine experts.
Still, along with a few good pinot noirs made in Germany, Oregon and New Zealand, the Alsatian reds “have a card to play”, Iltis said.
Since Burgundies such as Beaune, Pommard and Volnay, hit by devastating hailstorms the last three years, “are selling at exorbitant prices, there is a place for the reds of Alsace,” Deiss said.
Mure said she could vouch for the fact that world demand for pinot noirs is strong. Her wines have been flying off the shelves for years.
By Yann Ollivier