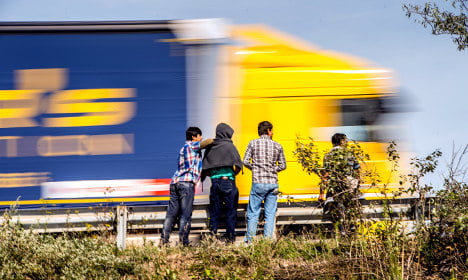 Photo: AFP
The authorities said they received a “strange call” around 0800 GMT from “a man speaking English in a barely audible voice, who seemed to be suffocating, and did not know where he was”.
They were unable to trace the call because the phone was using a foreign SIM card, but after lengthy exchanges they figured out the lorry was somewhere on the highway between Paris and Lille.
The operator who took the call could also hear others in the background.
Ambulances then traveled up and down the motorway until they spotted the lorry at a rest stop and went to investigate.
“They tapped on the lorry and knew there were people inside,” said an emergency services source.
With the help of roadside assistance, they were able to force the doors open and found 15 men aged between 25 and 45. Their nationalities were not given.
“Inside, amid crates of oranges, they found 15 migrants who could barely breathe and were in various stages of hypothermia,” said the source.
The driver, who was not in the lorry when it was found but returned soon after, said he did not know what he was carrying. He was detained by police.
One of the migrants was treated immediately at the scene while the others were transported to nearby hospitals.
Thousands of migrants, most from East Africa and the Middle East, have streamed into France on the way to the northern port of Calais in the hope of ultimately reaching Britain.