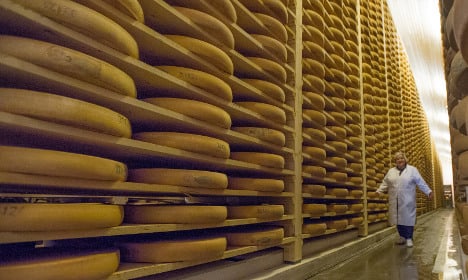 French luxury goods have often been the target of organised crime gangs, looking to make a quick buck on the black market.

But while designer goods like hand bags and luxury products such as perfume have often been targeted, delicacies such as French cheese are normally lower down a burglar's wish list.

But times are changing and it appears thieves can make easy money flogging knock-off fromage just like they can perfume.

On Monday the owner of the Napier dairy in the town of Goux-les-Usiers, eastern France reported a break-in the previous night.

Thieves had helped themselves to approximately one hundred wheels of Comté cheese, a speciality of the region of Franche-Comté.

“We heard nothing,” André, who lives next door to the dairy, told L’Est Republicain. “The people who did this, they must know the area,”

The thieves cut through barbed wire before forcing a back door of the building using that basic burglary accessory – the crowbar. In all they made off with around 100 wheels of the cheese, which can sell up to €40 a kilo for a particularly matured Comté.

Estimates say the loot is worth anything from €40,000 upwards.

Comté is officially a protected cheese in France after being awarded the Appellation d'Origine Contrôlée, which means it can only be produced in that region.

The Montbéliarde et Simmental breeds of cow are the only type that produce the milk that is used to make the cheese, that can spend up to 36 months maturing in a cellar.

Police are focussing their inquiries on recent thefts of large vehicles which may have been used to store the cheese.

“With such a quantity, you need a means of transport and a distribution network,” said Daniel Prier, Head of the Chamber of Agriculture for the Doubs region.

He added that a text message alert system was being put in place so that potential witnesses could supply information.

Although the cheese theft sounds bizarre, the reality is we shouldn't be surprised;

A 2011 study concluded that the most stolen food product in the world was not Kobe beef or aged whisky, but cheese.

The Centre for Retail Research in the UK found that 4 percent of all cheese produced was actually stolen.

At the time Dr. Joshua Bamfield, Director of the Center for Retail Research said cheese was “a lucrative business opportunity for small time criminals.”

“It's not just grannies saying, I need some cheese I'll just go and steal it. A lot of the theft is for resale and a lot of this cheese will be resold into other markets or to restaurants,” he told the UK's Huffington Post.