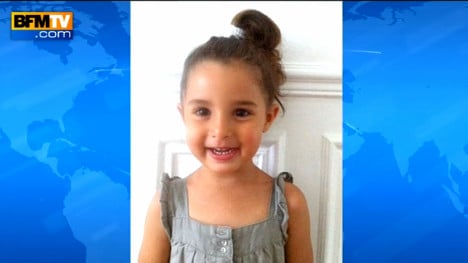 Three-and-a-half-year-old Lila is feared to be Syria-bound. Photo: BFM TV
Magali Laurent, 35, hasn't seen her three-and-a-half-year-old daughter Lila for over two weeks.
The mother appeared on French TV in tears on Monday night to say she was “1,000 percent sure” her ex-husband was on the way to Syria with her daughter.
“She is in imminent and very serious danger! Perhaps he hasn't crossed the border yet. Please, help me. Don't leave my little girl in this hell. I'll move heaven and earth to find her, but I need help,” the mother said.
The girl was supposed to have been on a one-week holiday with her father in Tunisia, but the pair never returned. Laurent heard from her ex-sister-in-law that the pair were instead in Turkey and didn't plan to return to France. The latest Skype call he took part in showed that he was just 40 kilometres from the Syrian border.
Laurent, together with her lawyer, begged top French authorities on Monday to help return her daughter.
The lawyer, Franck Berton, said that the report of abduction was not logged until Monday due to the fact that children were still on school holidays until then.
The 35-year-old woman and her Franco-Tunisian ex-husband were married for three years, and divorced in 2014 after the man was fired from his hotel job for serious misconduct.
The man then began to grow a beard, wear a djellaba, and attend mosque every day, his ex-wife said.
She added that he had radical ties, showing his support for the Charlie Hebdo terror attacks in Paris earlier this year.
The story has chilling echoes to a the case of young mum Meriam Rhaiem, who in March last year made a similar emotional appeal to French authorities to recognize her two-year-old girl as “the youngest French hostage”, claiming she had been smuggled from France by her father.
The mother and daughter were reunited in September last year after a joint return effort by Turkey and France.