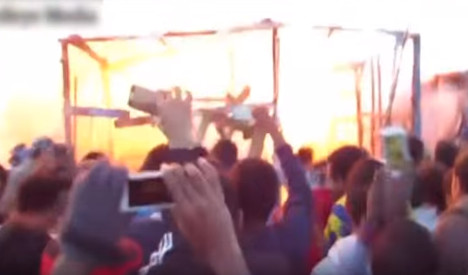 The video shows refugees at the camp in Calais watching a blaze and taking footage on their mobile phones.

Then all of a sudden there’s a huge explosion which sends onlookers running for cover.

According to reports the blast was caused by gas canisters that exploded as the fire burned.

It is believed that no one was injured in the incident, but it highlights the ongoing concerns about conditions in the camp, which aid groups describe as” deplorable” and “inhumane”.

One particular worry surrounds the building of fires around the site, which is likely to become more common as winter approaches.

The French government has come in for criticism for not doing enough to help the estimated 6,000 refugees and migrants living in the camp.

On Monday work began on a new tented camp for around 1,500 people, that should be ready to open in January.

Aid groups though, claim it is inadequate and have called on permanent lodgings to be provided.