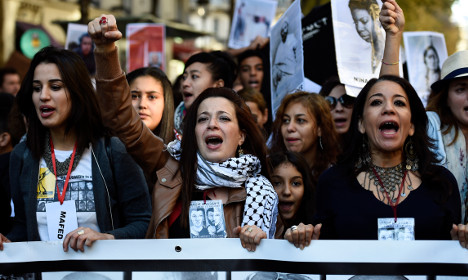 The two teenagers were electrocuted at a power substation on October 27, 2005 as police investigated a reported break-in at a building site in the northern Paris suburb of Clichy-sous-Bois, which has a sizeable immigrant population.

Their deaths were the trigger for three weeks of riots across France as tensions already simmering over high youth unemployment and police harassment of youths from poorer housing estates boiled over.

The government was forced to declare a state of emergency and by the time calm was restored on November 17, 10,000 cars had been burned, 300 buildings destroyed or vandalised, two policemen shot and injured, and 6,000 people arrested. Saturday's march set off with a group of women at their head under the banner “march for dignity against racism.”

Participants, many of whom had travelled to the capital from around the country, called for “justice, reparation, unity” as they descended on the northern Barbes district for a rally called by women's collective Mafed, backed by US civil rights campaigner Angela Davis, as well as anti-racist and anti-discrimination associations.

“Today in France, if you don't have the right skin colour … you can die at the hands of the police,” said Mafed spokeswoman Amal Bentounsi, who said her brother was killed by a policeman in 2012. Despite a decade of government initiatives to revitalise underprivileged suburbs, many residents say little has changed and this week the deputy mayor of Clichy-sous-Bois warned conditions were right for riots to happen again.