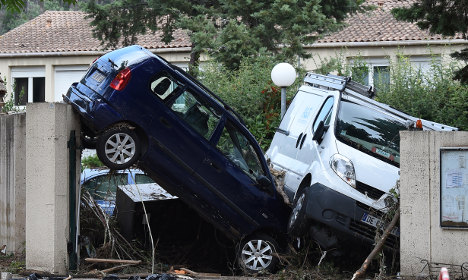 The French Riviera was slammed by heavy flooding in October. Photo: AFP
France's weather agency Météo France has issued Orange weather alerts – the second highest grade of alert – for six départements in southern France.
The départements on orange alert are: Aude, Gard, Haute-Garonne, Hérault, Pyrénées-Orientales, and Tarn – all in southern France (see map below).
It also issued warnings for départements further inland, as well as further eastward along the Mediterranean coast. The agency predicted winds of up to 130km/hr and up to 200 millimetres of rain, in thunderstorms that are expected to hit mid-afternoon on Monday.
The Orange alert – which asks residents to be vigilant especially when travelling – will be in place until 1pm on Tuesday.
Residents in southern France will likely take the warnings seriously after October proved to be a rough month for the nearby Riviera, where days of intense flooding saw 16 people killed.
Last week, the mayor of France's glitzy Cannes resort appealed to the world's movie and music stars to help rebuild the town.