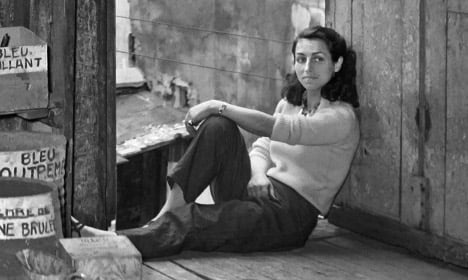 French painter Francoise Gilot poses in a painter's studio in 1953. Photo: AFP
“There are probably fewer rapes in France because people are less repressed,” says Francoise Gilot, the 93-year-old former muse of Pablo Picasso.
Gilot was together with Picasso after meeting him at the age of 22 back in 1943. Despite being 40 years his junior, the pair stayed together for ten years and had two children.
And now, the French painter and author has turned heads with her comments about the how people are handling the “eroticism” in the streets all wrong.
In her new book, “About Women: Conversations Between a Writer and a Painter”, she writes that women should be smiling at the men who whistle at them.
Gilot, whose views differ from her American co-author Lisa Alther, writes says that people could enable social cohesion if they only weren't so uptight.
“If a man whistles at you and you smile, that oils the social wheels and eases the tension between the classes and sexes… It's a kind of give-and-take that acknowledges that the other person exists.”
She says taking offence all the time only makes relationships disagreeable. (Françoise Gilot. Photo: AFP)
“There's always a subtle ambience of eroticism in the streets, in the air, of Paris. For instance, when you go to the market to select peaches, if you ask the vendor 'Are your peaches ripe?', he'll often say yes with a wink because the peach is considered a fruit similar to the female sex. Sometimes having intercourse is referred to as 'eating a peach'.”
The co-author Alther is among those who disagree with the statements, writing that women “resent being turned into objects” by men whose comments are often “demeaning”.
Gilot argues that it's nothing more than the “eroticism of life”.
“Each time a man says something to me, if I take it as an insult, then I'll be insulted several times a day by strangers I'll never see again… Whereas if I smile vaguely and go my way, it doesn't cost me very much.”
Earlier this year The Local reported how new figures revealed that a sex attack takes place in France every 40 minutes.
The statistics, gathered by the ONDRP observatory and published in August by Le Figaro newspaper, show that there were 12,700 sexual assaults reported in France in 2014 – a leap of 18 percent since a similar survey in 2010.
In Paris alone, there were a total of 600 reported sexual assaults and rapes last year.
Clair Serrecombe, spokeswoman for women's rights group Osez le Feminisme, told The Local at the time that other surveys suggest there are as many as 75,000 rapes and sexual assaults each year.
That would equate to just over 200 each day.
“The only positive thing that these stats show is that more women than before are coming forward to police to report sexual assault,” Serrecombe said.
“But given the extent of the problem there is a real lack of willingness on the part of public powers to lead a real campaign to tackle rape,” she said.