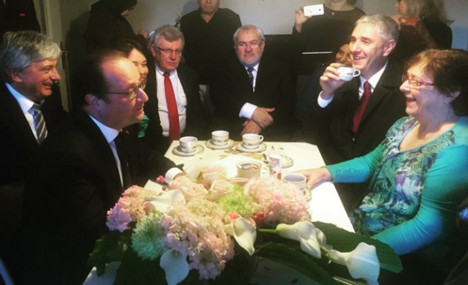 Is it time François Hollande ditched his communications team?

That's the question the most unpopular French president in history could be forgiven for asking himself this week after another bungled PR exercise.

Yet again an attempt to improve the president’s dire popularity ratings appears to have had the opposite effect, just weeks before the crucial regional elections.

This time it was his apparently spontaneous visit last week to the house of Lucette Brochet in the town of Vandoevre-lès-Nancy, eastern France.

The visit was part of Hollande’s attempts to mobilize voters, but in the end he may have lost supporters.

After a trip to promote the voluntary military service (SMV) the president was “invited” into the house of Lucette to see her new apartment.

She told Hollande of her previous experience living in a tower block with a rat infestation.

Upon leaving Hollande said: “Thanks for having me. Here you're almost better off than the Elysée. I can tell you.”

Pictures emerged of Hollande sitting opposite the 69-year-old woman chatting, smiling, laughing and doing everything he could to appear normal, charming, even presidential.

They were tweeted out by his comms team led by the now famous Gaspar Gantzer.

But then over the weekend BFM TV were able to interview Madame Brochet who revealed the coffee break was anything but spontaneous.

She was apparently chosen because she is close to Stephane Hablot, the Socialist mayor of Vandoeuvre-lès-Nancy.

And every detail down to the flowers on the table was organized by either the mayor's staff or the president's. Even the coffee was brought in by the local Socialist Party-run Town Hall.

The woman was also told which kind of questions she could and couldn’t ask.

“On Tuesday, people came round from the Elysée to ask me questions and tell me what I could and couldn’t say,” she told BFM TV.

“I wanted to tell him that he does a lot for immigrants but there are homeless men dying on the streets, but I couldn’t say that,” she told BFM TV.

When word spread of the carefully planned comms operation, naturally the recriminations soon followed from opposition politicians like the National Front's Marion Maréchal Le Pen, who said: “This is what the presidency is reduced to, trying still to appear just a little bit popular.”

Even among his own party there were murmurings and objections to his “over-communication” strategy.

The finger has been pointed at Gaspar Gantzer, who leads the president’s communication team.

It was Gantzer’s idea for a recent documentary that was made about Hollande’s time in the Elysée that was also heavily criticized.

Critics said the documentary showed far too much of Gantzer, and far too little of the president.

Indeed it was Gantzer's name that trended on Twitter the following day, rather than Hollande’s.

It was also revealed on Monday that Hollande's venture into social media is to continue apace. After taking to Twitter and Instagram, the president is open a Snapchat account as another way to try and reach young voters.

It appears that the golden principles of effective communication, which is to make it appear invisible, is failing abysmally for the president.

Hollande might need to rethink his communication’s strategy if he wants to stand any chance of even making the second round of the presidential election in 2017.