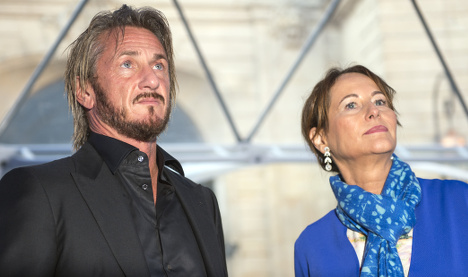 Penn, one of Hollywood's most socially engaged actors and directors, was in the French capital to meet Environment Minister Segolene Royal with less than a month to go until the 21st United Nations Climate Change Conference begins.

“I think it's the last great hope in particular because of the way the French leadership has taken leadership in this. We can only be optimistic, there is no other choice,” Penn told AFP in an interview.

Any efforts by the politicians must however be accompanied by a “cultural shift”, he said.

“Everybody is going to have to change in their daily life. If you love your children you have to make some changes or they will have a far lesser world than we've had. So that's simple and it's immediate.”

World leaders including US President Barack Obama and his Chinese counterpart Xi Jinping will come together in Paris aiming to reach a single agreement on tackling climate change, with the goal of capping warming at two degrees Celsius (3.6 degrees Fahrenheit) over pre-Industrial Revolution levels.

Penn, the star of “Mystic River” and “Harvey Moon”, is involved in a project to support the reforestation of Haiti which is backed by the French state.

The initiative grew out of the time he spent in the Caribbean state following the devastating earthquake in 2010 that killed over 250,000 people, left 1.2 million homeless and reduced much of its frail infrastructure to rubble.

“It's an agro-reforestation project,” he said. “Haiti has had no middle class significantly for generations and so we believe that through agriculture and an export economy, Haiti's sustainable economy will return.

“Given the timing in the world the re-forestation project has obviously outreach beyond that which is simply about one country's economy.”