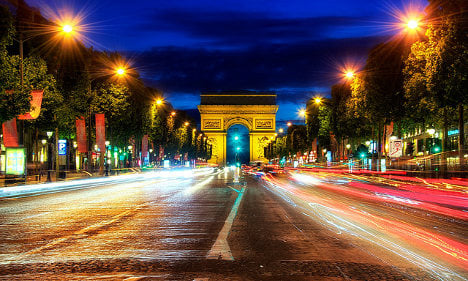 Photo: Jim Nix/Flickr
“The most beautiful avenue in the world, filled with luxury stores, tourists, cyclists at the end of July [for the end of the Tour de France], and working on new ideas to give it a new shine.”
So reads the announcement from officials behind a project to reinvigorate the Champs-Elysées, which stretches 1.9 kilometres from the Place de la Concorde to the Arc de Triomphe.
And even though it plays host to around 300,000 pedestrians each day, it hasn't had a renovation in 20 years.
But good news – the team at The Paris Urbanism Agency (APUR) has some major plans for the avenue that are expected to be finished by 2025, plans they've promised to reveal in detail by January.
The planning phase will be carried out together with the Paris Town Hall and the Champs-Elysées committee, the president of which is an advocate for a more pedestrian friendly street.
“The onslaught of vehicles makes the avenue unbreathable,” the committee president, Jean-Noël Reinhardt, told Le Parisien on Friday.
READ ALSO: Ten ideas that could improve life in Paris

He pointed to the success of the Car-Free day in Paris in September, which saw the avenue closed off to cars and taken over by the public.
“Three quarters of people come on the Champs-Elysées for a stroll, have a drink, go to the movies … Only 25 percent go shopping,” he added.
With this in mind, plans include a stronger focus on offering bars, galleries, and cinemas – making space for them on the buildings' rooftops similar to in New York or Tokyo.
There is also talk about a major renovation of the parks that flank the eastern end of the road, the implementation of proper bike lines on either side of the avenue, and the semi-pedestrianization of Rue de Ponthieu, which runs parallel to the Champs-Elysées.
The plans will no doubt please Paris Mayor Anne Hidalgo, who is an outspoken fan of pedestrians in the capital. Her deputy told Le Parisien that the changes would be a great step for making the avenue a destination for the Parisians and the French, as well as the tourists.