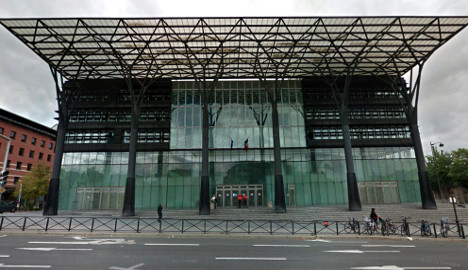 The court in Melun. Photo: Google StreetView
Joseph Scipilliti (see photo below) was due to be suspended by Henrique Vannier, head of the bar in Melun, just south of Paris, the source said.
But after arriving for the meeting in Vannier's office, Scipilliti fired a number of shots at him.
Vannier was said to be in a critical but stable condition after being taken to a nearby hospital.
“The president of our bar, Henrique Vannier, is, thank God, still alive,” said one of his colleagues, Florence Lampin.

The reason for the decision to suspend Scipilliti, who is now dead, has not been revealed.
Many journalists were at the courthouse on Thursday for a hearing into a baby that was found in Fontainebleau forest in 2013.
The shots were not heard from the courtroom, but the judge hearing the case suspended proceedings due to “serious events”, an AFP journalist said.
Justice Minister Christiane Taubira expressed her “dread” at the “terrible attack” in a statement.
“It is a terrible event as well as an exceptional one,” added Pascal Eydoux, president of the National Council of Barristers.
Another lawyer told BFM TV that it would have been easy for Scipilliti to enter the courtroom with a firearm as lawyers aren't checked by security.
“Lawyers just need to show their ID card, we never get searched,” he said.