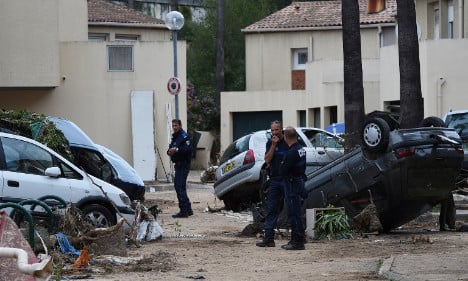 Floods earlier this month left the Riviera looking "apocalyptic", said a local mayor. Photo: AFP
France's weather agency Météo France has issued an Orange weather alert – the second highest grade of alert – for the Gard département in southern France, predicting the possibility of “intense thunderstorms”.
It also issued warnings for the entire Riviera for storms.
The nearby départements of Ardèche and Lozère are also expected to be particularly hard hit, according to Le Figaro's weather agency La Chaîne Météo.
The slopes of the nearby Cevennes mountain range have already seen 130 millimetres of rain since Tuesday, and the agency is predicting up to 200mm more before midday.
The Orange alert – which asks residents to be vigilant especially when travelling – will be re-evaluated at noon.
The French Riviera suffered earlier this month when a horror storm swept through the Cote d'Azur, drowning the area in 180mm of rain in just three hours, and claiming the lives of 16 people.
The local mayor called the scene “apocalyptic“, with cars being washed out to see, tourists stranded in airports, and tens of thousands of residents being left without electricity. (A boy stands next to rubble and damaged cars after the last storms in southeastern France. Photo: AFP)