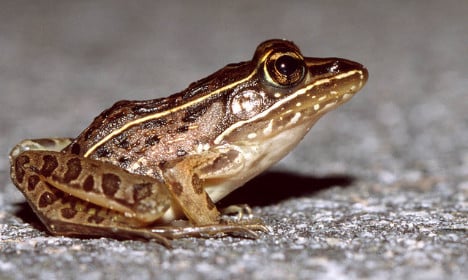 Photo: Tom Spinker/Flickr
Why did the French frog cross the road?
Well if you're talking about the frogs in Vern-Sur-Seiche, in Brittany, then the answer is because they have no other way to reach their breeding grounds.
Indeed, every year between January and March, thousands of the bouncy amphibians, as well as toads and lizards, head from the forest to the pond each year, meaning they have no choice but to cross the D86.
Some of the species are even protected in Europe, one volunteer told Ouest France newspaper, adding that around 1,200 are flattened each year. (Photo: La Parvole Volunteer Group)
But not anymore, hope local authorities, who have forked out €65,000 on constructing a set of five tunnels beneath the road.
The tunnels were installed at strategic points along the D86, which plays host to over 4,000 vehicles each day.
The news was no doubt welcomed by the volunteer group, La Parvole, which had spent eight years placing small tarpaulin fences along one side of the road to catch the wildlife, then help the frogs migrate by hand.