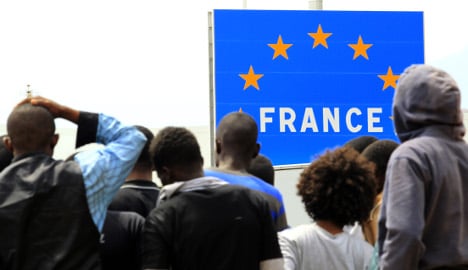 When it comes to welcoming in thousands of refugees the French are far more reluctant that their German and Italian neighbours, which are bearing the brunt of the ongoing crisis.

An Ifop poll published on Wednesday revealed that only 46 percent of French people are favourable to welcoming refugees and migrants.

The British are even more reluctant with only 44 percent in favour of taking in migrants.

That compares with 79 percent of Germans and 77 percent of Italians, two of the countries that have come under the greatest pressure as the crisis has deepened.

As well as being reluctant to welcome refugees making their way from the Middle East and Africa, the French are also doubtful that the new arrivals will be able to integrate into French society.

Indeed 63 percent of the French believe the country has taken in too many refugees already and it’s impossible to take in anymore.

Those behind the poll said the fear was high in France and the UK that welcoming refugees would only encourage more to come. It’s a phenomenon known as an “appel d’air” in French and a theory that has been dismissed by aid groups working on the ground in places like Calais.

When it comes to those who believe European countries have a moral right to take in refugees, only 54 percent of French and British agreed, compared to 79 percent in Germany.

In most countries a large majority hoped that the migrants who are heading to Europe now, only stay for a few months.

Jerôme Fourquet, a political analyst and pollster from Ifop told The Local that the difference of opinion in France and Germany is due to the two countries facing contrasting political and economic challenges, as well as levels of fears of Islamist terror attacks, that can account for the diverging stances towards refugees.

“One country is prospering and healthy, and the other is in the middle of an economic crisis,” Fourquet tells The Local.

“In Germany unemployment stands at five percent and there are whole sectors where they are in need of workers. But in France we have ten percent unemployment and it's not falling.”

Fourquet also points out the difference in public finances between the two countries with spending balanced in Germany, unlike in France where the deficit is significant and the politicians talk of the need to balance books.