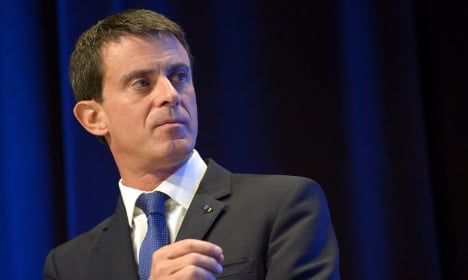 Photo: AFP
While many politicians have preferred to stay out of the Catalan independence debate, France's Prime Minister Manuel Valls seems positively excited at the prospect of independence and for one major reason… football.
The Barcelona-born French politician has said that Barcelona FC could join Ligue 1 next season if they were forced to leave the Spanish Liga.
“If Monaco play in Ligue 1 why not Barcelona?” Valls said to weekly publication Challenges.
The story was big enough to warrant a front page of AS, one of Spain's biggest sports newspapers. (Valls and Paris Mayor Anne Hidalgo at a Barcelona/PSG match. Photo: AFP)
Barcelona faces being thrown out of the Spanish league if the north-eastern region declares independence.
Valls, a life-long Barcelona supporter, previously told French newspaper the Journal du Dimanche: “I’m a huge football fan, a Barça fan. They're in my blood.”
As Valls' offer hit the headlines around the world, the French Embassy in Spain issued a statement downplaying the Prime Minister's offer:
“The words attributed to the Prime Minister are a false interpretation,” a spokesman told Spanish news agency Efe, stressing that the French government considered the topic “an internal issue for Spain”.
Support for independence is strong among many Barcelona fans. The club has been fined twice in as many months because of fans waving Catalan independence flags during matches.
Barcelona announced this week that it was taking Uefa to court for the fines, saying Uefa had “violated its fans' freedom of speech”.