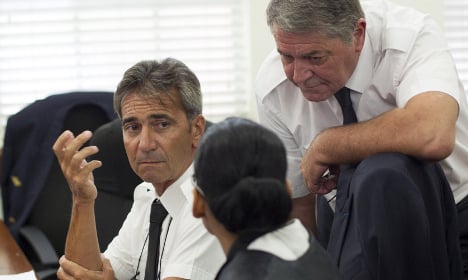 Government spokesman Stephane Le Foll told French radio on Wednesday morning that it had no plans to extradite Bruno Odos and Pascal Fauret, the two French pilots who given 20-year jail sentences in the Dominican Republic for cocaine-trafficking.

“France will apply the rule of law. We don't extradite our own citizens when they are on French soil,” he said.

On Tuesday it emerged the pair had manage to slip out of the country after an escape that would not have been out of place in James Bond movie.

The pilots say that had returned to France, not to escape justice but to clear their names. But authorities in the Dominican Republic were furious and demanded they be returned.

The pair were among four Frenchmen sentenced in Santo Domingo in August in a case dubbed “Air Cocaine” in France.

But on Tuesday they were back with their families in France after travelling by boat from the Dominican Republic to the Franco-Dutch island of Saint Martin before flying to Martinique and then on to France.

Fauret told a press conference in Paris that he felt the men had no choice but to leave the Dominican Republic, where they were not being held in detention pending a judicial appeal.

“The justice system did not open an investigation, it did not listen to us and we were sentenced to 20 years in jail just because we're French and not good Christians,” he said.

“I'm sorry, but my first instinct was to return to my country where I could speak before a functional justice system and try to go back to a normal life.”

Their lawyer Jean Reinhart insisted the men had not “fled” the Dominican Republic.

“They are in France not to flee justice but to seek justice,” he told AFP.

“They are not escapees, because they were not in prison,” he added, explaining that although they were not in jail they had been barred from leaving the Dominican Republic pending the appeal.

Exactly how the pilots managed to leave remains shrouded in mystery.

Eric Dupond-Moretti, a high-profile lawyer who is representing the pilots, said he could not give details of their journey because “it was not done alone, there were other people involved”.

But he said the men had left of their own accord, telling the press conference: “It's no use imagining that a team of spooks was paid by the French state to facilitate this escape. That's not it at all.”

The foreign ministry said the men had received no help from the French government.

The Dominican Republic said it would seek an international warrant for the men's re-arrest.

“We are in contact with the French authorities, not only to determine how they escaped the country and their accomplices, but also to make them assume their responsibility in (the Dominican Republic), regardless of any other cases that may arise in France,” he said.

The pilots were arrested in March 2013 along with two other men, Nicolas Pisapia and Alain Castany, as they were about to take off from the Dominican resort of Punta Cana.

Authorities said they were preparing to leave on a privately hired mid-size Dassault Falcon 50 jet with 26 suitcases containing 680 kilograms (1,500 pounds) of cocaine.