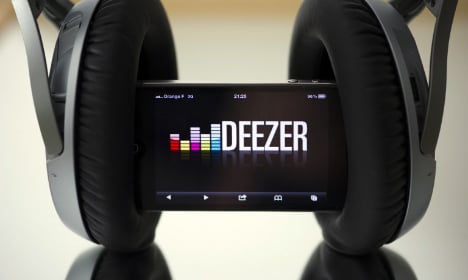 France's Deezer has its sights set on Sweden's Spotify. Photo: AFP
The company, which sought to raise at least €300 million ($330 million), said it “will review its fundraising options in the future” in a
statement released on Tuesday.
“Deezer is well funded and well positioned as it continues to pursue its growth strategy,” it added.
The company had favoured an IPO over private funding to give it more visibility as it seeks to take on its better-known Swedish rival Spotify in a music streaming market that is becoming more crowded with the entry of Apple.
The IPO would have valued Deezer at between €900 million and €1.1 billion, just a fraction of Spotify's estimated value of more than $8 billion.
Founded in 2007, the company raised its last private funding of €100 million from Russian-American billionaire Len Blavatnik in 2012. Deezer's catalogue of 35 million songs is available in 180 countries.
With 6.3 million subscribers and 16 million individual users each month, Deezer is still tiny compared to Spotify, which claims 75 million users, of whom 20 million subscribe to its paying version.
While not yet profitable on a global level, Deezer reported in 2014 a 53 percent jump in revenue to €142 million, and it is aiming to exceed €750 million in revenue by 2018.