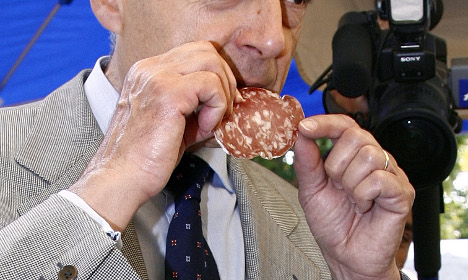 Would you give up your saucisson? Photo: AFP

France is world renowned for its cuisine, much of which – as lovers of French gastronomie will know – contains red meat.

And products like saucisson, rillettes, jambon sec, and various other types of charcuterie are the mainstays of the sacred aperitif.

The problem is that the World Health Association has declared war on processed meats by putting them in the same category as smoking and alcohol for their risk in causing cancer.

As you can imagine the news has not gone down well in France, not least among the country’s meat-eating hordes who are understandably reluctant to give up their hearty habit.

Maxime, a 21-year-old student in Paris, seems to think that what the WHO is saying is absolutely nonsense.

“What are they going to say next? That water can also give you cancer?” he told The Local.

Lena, a 36-year-old woman from Paris, was also unwilling to say ‘non’ to saucisson.

“If it gives you cancer then so be it. I could never live without it,” she said.

An 83-year-old Frenchman told The Local that he had survived far worse than an overdose of charcuterie so he wasn’t going to stop eating meat just because the health boffins at the WHO say so.

“I survived World War Two and that didn’t kill me, so to hell with what they say,” said the veteran who asked not to be named. Another French woman looked positively disgusted at the thought of never buying a saucisson again.

“Today it’s red meat and tomorrow it’ll be something else. If I listen to what they say I’ll end up starving myself to death,” the mother-of-three told The Local.

According to the figures the average Frenchman eats about 86.7kg a year of red meat which is 2.5 kg more than what meat lovers in the UK consume.

Regarded as the prince of all sausages, the French saucisson sec is arguably a patriotic symbol of France – and French people tend to be patriotic, so it's no surprise how much they get through each year.

Apparently 2.2 kilos of saucisson are munched each second in France, which adds up to a total of 70,000 tonnes a year.

Critics of the WHO insist there are benefits to eating red meat, mainly that it introduces protein, iron zinc and vitamin B into your diet.

Those in the French meat industry have also been defending their produce and stressed there was no need to give up saucisson, sausages or the likes of andouilette (pig's intestines) if eaten in moderation.

A butcher in the 19th arrondissement told The Local he was confident sales of red meat and charcuterie would remain buoyant despite the health warnings.

“This report doesn't worry me at all. I haven't seen a decline in customers coming in,” the meat seller said.

And if his customers are like him, then he should be fine.

“I'll stop drinking alcohol and smoking if needs be, but I could never give up meat as it's essential to my diet,” he said.

The FNSEA, the leading farmers' union, reveals that even if “the excessive consumption of meat is certainly not to be promoted”, it is still possible to “indulge and have a nutritional diet” when eating both meat and vegetables.

“Living in the 21st century is carcinogenic. It’s the excess that makes everything go awry. People need to know how to control good things and consume in a sensible manner,” butcher Yves-Marie Le Bourdonnec told France TV Info.

Even if the local butchers are still sharpening their knives in frustration, the general French public seem to be taking no notice of what the WHO is telling them.