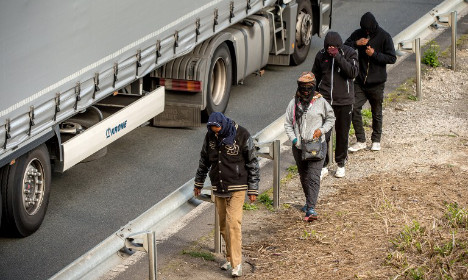 Refugees in the northern French port of Calais. Photo: AFP
The incident occurred late on Monday night in Calais, not far from a petrol station, reported La Voix du Nord newspaper.
The four refugees were walking along the roadside when a vehicle hit them with such force that they were knocked into a nearby ditch.
One person died from the impact, while the three others – all Syrians – were taken to hospital.
Details about the deceased refugee's gender, nationality, and age remain unknown.
Police have launched a manslaughter investigation, and are working to track down the mystery driver who left all four for dead.
A source close to the investigation told the paper that police will be helped by a vital clue – a piece of the vehicle that was left behind after the crash.
The death of the refugee marks the 18th in the area since June, reported the paper.
Around 4,000 people, mostly from East Africa and the Middle East, are camped around Calais, hoping to reach Britain, with around 1,000 more gathered around the port of Dunkirk, around 40 kilometres (25 miles) away, also trying to reach England.