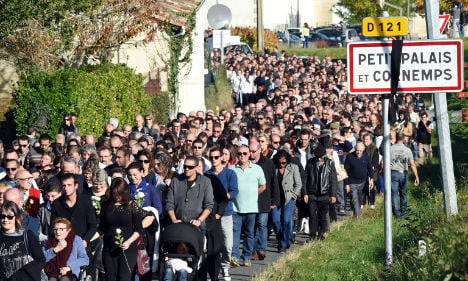 Thousands march for the victims of Friday's crash
A coach carrying members of a pensioners' club on an excursion collided with a lorry and burst into flames on Friday near the village of Puisseguin, among the vineyards of the Saint-Emilion area near Bordeaux, plunging southwest France into mourning.
Between 4,000 and 5,000 joined a march on Sunday at Petit-Palais-et-Cornemps, a town some seven kilometres (four miles) from the crash site, a town that was especially hard hit by the accident, according to police figures.
Carrying white roses or wearing black arm bands, the marchers passed through the town in silence. The cortege was headed by relatives of those who had died and by the town's mayor, Patricia Raichini, who herself lost three sisters-in-law as well as members of her council. (The burned-out coach. Photo: AFP)
Among the mourners was 73-year-old carpenter Jean-Claude Leonardet, bandages around his face, who was one of only eight people who managed to escape from the blazing bus.
“It's a century that has been wiped out from our town,” said Georges Puyastier, choking up as he recalled elderly residents who would no longer be part of a close community.
Also Sunday national police said their search of the wreckage of the coach and the lorry confirmed a total of 43 people killed.
“We found 43 bodies, 41 in the bus and two more in the lorry… For us it's a final toll,” said commander Patrick Chilliard of the national judicial police.
SEE ALSO: France's deadliest coach crashes since 1973