Zlatan Ibrahimovic was among the scorers as Paris Saint-Germain opened up a seven-point gap over their nearest rivals at the top of Ligue 1 with a 4-1 victory over Saint-Etienne on Sunday.

Layvin Kurzawa and Edinson Cavani netted before Ibrahimovic, PSG's all-time leading scorer, got his seventh goal in his last four matches against Saint-Etienne to put the game beyond the visitors at the Parc des Princes.

Marco Verratti put through his own net to give Les Verts, who are fifth, a consolation but Lucas headed in the hosts' fourth to secure a comfortable PSG win that underlined the yawning gap between them and the rest of French football.

Laurent Blanc's side have still not lost a game this season in any competition and are now undefeated in 20 Ligue 1 matches since March.

That form has allowed them to move seven points clear of Angers, the newly-promoted surprise package who drew 0-0 at home to Guingamp on Saturday.

Blanc made three changes to the team that drew with Real Madrid in the Champions League during the week and it was one of those players brought into the side, Kurzawa, who opened the scoring midway through the first half.

The former Monaco left-back fired in a low shot from the left side of the penalty area that Saint-Etienne 'keeper Stephane Ruffier got a touch to but could not keep out.

Ruffier did make a tremendous save to deny Cavani before the break but he could not prevent the Uruguayan from converting an Ibrahimovic assist three minutes after the interval for his seventh league goal of the season.

Cavani returned the favour when he set up the Swedish striker to grab his seventh of the campaign midway through the second period, before a Marquinhos clearance ricocheted off Verratti and in for an own goal at the other end.

However, a Lucas back-post header crossed the line despite Ruffier's attempts to keep it out as the capital club put the seal on their victory.

“To have 29 points after 11 matches is a very good thing, because some of our direct rivals have been dropping points,” said Blanc.

“We need to try to improve our game in the league and play with greater determination so we don't get taken by surprise when it comes to the Champions League.”

Earlier, Monaco closed in on the European places with a 1-0 win at Reims as Bernardo Silva got the only goal of the game against their 10-man hosts.

Leonardo Jardim's team opened the scoring in the 11th minute at the Stade Auguste-Delaune when Nabil Dirar crossed from the right and the diminutive Silva got up to head in his third goal of the season at the back post.

They might have added to their lead but Argentine striker Guido Carrillo hit both posts before the interval, while Jordan Siebatcheu hit the upright for Reims in stoppage time.

The hosts had been reduced to 10 men midway through the second half when Antoine Devaux walked for a second yellow card, as Monaco claimed a first league win in a month to climb to eighth.

“Away from home our team is very compact and very good in the transitions,” said Jardim.

“We tried to score the second goal, first by playing our game, and then by trying to be more direct. We were unable to put the game to bed, but I think we deserved the victory.”

Marseille, meanwhile, ended a run of seven games without a win as Michy Batshuayi and Romain Alessandrini scored in a 2-1 success at Lille.

Batshuayi opened the scoring late in the first half, converting his eighth goal already this season after Alessandrini's initial attempt had come back off the post.

The Belgian then returned the favour in the second half, setting up for a superb curling finish high into the net to double Marseille's lead before Sebastien Corchia pulled a goal back for LOSC.

Second-placed Angers were held to a 0-0 draw at home by Guingamp on Saturday, a result that did nevertheless allow them to stretch their unbeaten run to six matches.

Caen, in third, lost 2-0 at home to Nantes on Friday, while Lyon beat Toulouse 3-0 with goals by Sergi Darder, Mathieu Valbuena and Maxwell Cornet.

Nice's superb run of form was abruptly ended in a 3-1 defeat at previously winless Gazelec Ajaccio, while Montpellier beat Bastia 2-0 and Lorient drew 1-1 with Rennes in a Brittany derby. 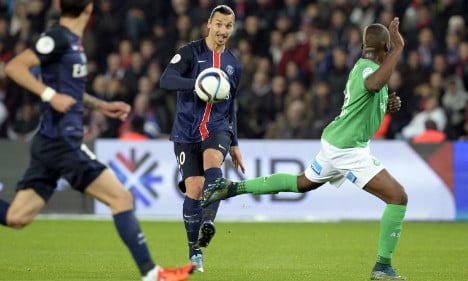