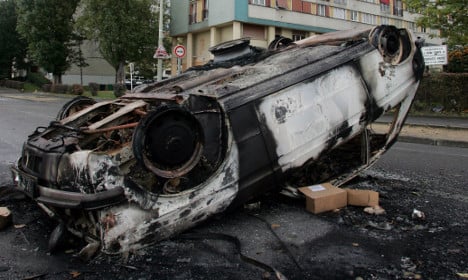 While the burned-out cars are gone, Clichy-sous-Bois remains a fragile suburb. Photo: AFP
Ten years ago to the day on Tuesday, two teenage boys on their way home from a football match were electrocuted at an electricity substation in Clichy-sous-Bois while running away from the police.
Zyed, 17 and Bouna, 15 had done nothing wrong, but simply didn't want to be harassed by police.
Their deaths, which will be marked in a memorial service on Tuesday night, sparked a night of rioting by youths in Clichy-sous-Bois, that soon spread to other rundown suburbs (banlieues) around Paris and other French cities.
The violence continued each night until calm was finally restored on November 17th.
In all some 10,000 cars were torched, 6,000 people arrested, two policemen shot, and 300 buildings destroyed or vandalized. After the worst night, in which 274 areas were affected, the government was forced to declare a national emergency. (Riot police in Clichy-sous-Bois on a night in October 2005. Photo: AFP)
Ten years on and the name Clichy-sous-Bois is still synonymous with the rebellion and destruction by disaffected youths, and although the burning cars and debris from the rioting no longer litter the streets, the same feeling of hopelessness and isolation that provoked young men to turn their suburb into a war zone still remains.
When The Local visited the banlieue, many residents were reluctant to speak out, perhaps tired of the focus on their neighbourhood, but those who did painted the same old picture – one of alienation, and despair.
“Take a look around, what do you think has changed?” an unemployed man, who was 18 at the time of the riots, says with a scoff.
He points to the town's main road, which remains under construction, and an unimpressive shopping mall behind him, which is dark, dirty, and mostly empty of shops and customers.
The man, who declined to give his name, hasn't worked for two years – but that's nothing unusual. (The electric substation where teenagers Zyed and Bouna died. Photo: AFP)
Indeed, one official report from 2013 found unemployment was 23 percent in the poor suburbs, compared to nine percent countrywide. Among people aged 15 to 24, the figure rose to 42 percent.
And residents are still struggling to get by, with 43 percent living below the poverty line, meaning they have less than a €1,000 to spend each month.
And living conditions are poor.
“If I showed you my apartment you wouldn't believe it. There are cockroaches, there are rats,” one resident told The Local, using his hands to suggest the rats are the size of small dogs
“I wouldn't be surprised if there were snakes.”
Clichy is home to the notorious Chêne-Pointu, a privately owned council estate with 1,500 apartments, that is renowned for the squalid living conditions. (The notorious Chêne-Pointu housing estate in Clichy-sous-Bois. Photo: AFP)
Another man working in construction says he would leave town if only he could afford to. His aspiration is shared by many whose testimonies have appeared in French media in recent days.
“It's impossible to get a good flat. The Town Hall is running it like a business, the big shots with the money get looked after while the rest of us suffer,” he tells The Local.
Relations between youths and police are still tense.
Others share a feeling of abandonment in the town, which is not linked to the capital by any commuter train or Metro line.
“The problem is we have been abandoned out here. They have left us here',” says Abdoulay, a local 27-year-old.
“We're cut off. There's no internet in the houses and no internet cafes. If we want to use the net we have to go into Paris and that takes 90 minutes,” he says.
A new tramway to link the town to the RER commuter service has been delayed until 2019 and it won't be until 2023 that Clichy-sous-Bois has its own train station that will, at last, provide a direct link to Paris. (President François Hollande on a trip to Clichy in 2013. Photo: AFP)
He complains that the town could offer nothing besides the shopping mall, which he says was sub par, noting that it didn't even include any kind of large supermarket.
But the debate about who is to blame for the hopelessness and the disaffection is still the same one that raged in the aftermath of the 2005 riots.
One taxi driver who lives in a nearby town says the problems begins at home.
“For me, it's a question of having a good upbringing. I blame the parents. It's like those two teenagers who died in Marseille this weekend. They were 15 years old! What were they doing out at two in the morning,” he says, referring to what was reportedly a drug-related shooting in the southern port town on Saturday.

(Flyers around town advertise the memorial for the killed teenagers. Photo: The Local)
The man, who is originally from Portugal but who has lived in France for decades, says the police weren't to blame when it came to the young boys who were killed in 2005.
“Why are people running if they have nothing to hide?” he asks.
But for many residents and especially those that run the town, the time for determining who's to blame is long over and they just want to move on.
But it's proving to be hard.
“In the eyes of society and the media and in particular, we remain a symbol of the difficulties of the suburbs,” said the town's mayor Klein. (New housing in Clichy-sous-Bois, where huge towers are no longer built. Photo: AFP)
Lamya Monkachi, a local Town Hall spokesperson, told The Local that things were improving in Clichy-sous-Bois and the “stigmatization and stereotyping” must end.
She notes that in an effort to improve the town, authorities are working on education reforms, as well as massive improvements to infrastructure.
Indeed some parts of Clichy-sous-Bois are now unrecognizable: new and well-appointed apartment blocks have replaced the shabby towers that made life so easy for drug dealers and so difficult for the police.

(A park in the centre of town. Photo: The Local)
The Town Hall's Monkachi points out that two new schools, a new medical centre, an employment office, a public swimming pool and a police station have all been built.
But while those projects can only be welcomed the reality is they are seen as cosmetic and have done little for the population of Clichy-sous-Bois.
The situation, said Clichy-sous-Bois mayor Olivier Klein, “is even more negative today than it was 10 years ago.”
“The fragility of the population is still there”.
By Oliver Gee and Adam Jones