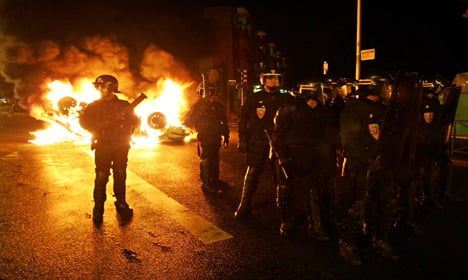 Many say little has changed for the better since the deadly riots that spread across France a decade ago. Photo: AFP

President Francois Hollande paid a rare visit to one of the infamous “banlieues” this week — Courneuve, north of Paris — where he vowed that under the egalitarian principles of the French Republic, “no areas are left behind.”

But the whistles of disapproval that accompanied his speech underlined the disillusionment of locals, even though many of them voted for him in 2012.

“This could explode once again, because the social injustices are still there and there is a deep hopelessness among the young,” warned Mehdi Bigaderne, the 32-year-old deputy mayor of Clichy-sous-Bois, the Paris suburb where the 2005 riots began and then spread to other parts of the country.

Bigaderne was a social worker in the area on October 27, 2005, when news broke that two teenagers had died while running away from the police.

Bouna Traore, 15, and Zyed Benna, 17, were returning home from playing football and had done nothing wrong.

But accustomed to harassment, they chose to run when they saw a police car. They scaled a fence to hide in an electricity substation and were both electrocuted.

“They had had enough of constantly being stopped by police, of the town being neglected,” said Karim, who was 16 at the time and took part in the riots. “The death of Zyed and Bouna was the last straw.”

“It was a spontaneous social and urban revolt — a self-mutilation,” said Bigaderne.

The violence spread to neighbouring estates such as Clichy, home to many poor first- and second-generation migrants — and then all over the country.

The peak came on the night of November 6 when 274 areas were affected. Three nights later, the government called a state of emergency.

By the time calm was restored on November 17, 10,000 cars had been burned, 300 buildings destroyed or vandalised, two policemen shot and injured, and 6,000 people arrested.

Since then, successive governments have launched initiatives to tackle the deep-rooted challenges in these areas, often seen as “ghettos” that are all but cut off from the cities they surround.

In Clichy-sous-Bois, some parts are unrecognisable: new and well-appointed apartment blocks have replaced the shabby towers that made life so easy for drug dealers and so difficult for the police.

But many see the changes as cosmetic. It can still take an hour and 40 minutes to reach Paris even though the capital lies just 15 kilometres (nine miles) away.

Politicians took renewed interest after the jihadist attacks on Charlie Hebdo magazine and other Paris targets in January that left 17 dead raised fears that the suburbs were becoming breeding grounds for radical Islam.

Prime Minister Manuel Valls went as far as talking of “a territorial, social and ethnic apartheid”.

One official report found unemployment was 23 percent in the suburbs, compared to nine percent countrywide, in 2013. Among people aged 15 to 24, the figure rose to 42 percent.

Experts say the problems of the “banlieues” have deep roots, one of which is urban planning.

Many estates were thrown up in 1960s and 1970s to house waves of North African and sub-Saharan African workers who provided cheap labour for what was then a booming economy.

These concrete complexes typically lie outside the historic city centre. Transport links and shopping can be poor, reinforcing a sense of isolation and injustice.

The 2008 financial crisis triggered “a considerable impoverishment of a large part of the population,” said sociologist Didier Lapeyronnie. “We see a reinforcement of the social and racial segregation.”

And the rise of the far-right National Front (FN) in recent years has only added to the tensions and the sense of separation.

The situation, said Clichy mayor Olivier Klein, “is even more negative today than it was 10 years ago.”